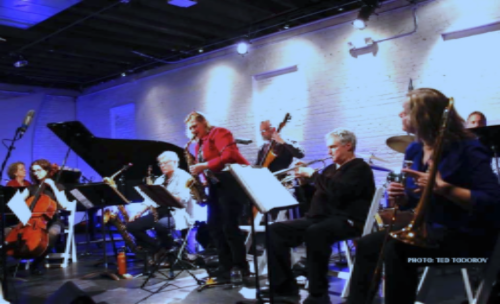 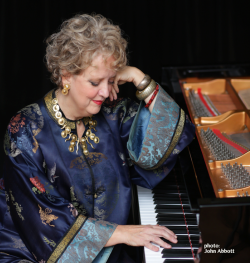 Twenty years ago, Brooklyn-based pianist/composer Cynthia Hilts was seeking to form a band as a vehicle for her brisk, striking originals. Her avant-meets-mainstream writing, as the band name Lyric Fury suggests, is demanding and defined by powerful contrasts.

Hilts and her octet have been honing a sound and a vision ever since, and their brilliant efforts are captured on their first recording together—the eponymous Lyric Fury—released on January 13th by Hilts’s Blond Coyote Records. Lyric Fury boasts a lineup of top-drawer players with highly distinctive “A” games of their own. They include trumpet great and onetime Mingusite Jack Walrath, saxophonists Lisa Parrott and Lily White, trombonist Deborah Weisz, cellist Marika Hughes, bassist Ratzo Harris, and drummer Scott Neumann.

The infectious opening track, “Those Basinites,” was inspired by the quirky residents of Basin, Montana, where Hilts did several residencies. But much of Hilts’s music, for which she writes her own poetic lyrics, responds to situations and events. “Previously a Thing,” a brash invocation that turns Horace Silver-style hard bop on its ear (dig White’s passionate tenor solo), was written after a breakup. The free-gliding “Blues for the Bronchs,” featuring out-of-sorts voicings and a ripping, hard-edged solo by Walrath, had its genesis in an unshakable case of bronchitis.

A seasoned peace activist, Hilts composed the album’s most lyrical and deeply affecting work, “Peace Now,” following the outbreak of the Iraq War. Her vocal—part scat, part chant, part heartfelt plea—is framed by the dark tones of Parrott’s baritone and Hughes’s cello and carried by bright rhythms. “Teacher,” with its delicate piano introduction and South African lilt, is a prayer for a spiritual leader.

Forming the octet proved a dream achieve- ment in many ways. “I have always been a loner,” Hilts says. “I didn’t understand the value of community. But I certainly do now, having benefited so much from the openness and contributions of these musicians. When I bring in a new piece, they understand not to try and do something new with it right away, even in cases where I haven’t written something right. They sublimate their individuality for a moment or two. And during performances of the music, they’re always coming up with surprises. It all works out in the end.”

Born and raised in Tucson, Hilts moved to New York City in the early '90s. After appearing on a free jazz album, “Invite the Unexpected”, with Mike Ellis, George Garzone, Graham Haynes, and Cecil McBee, she wrote and recorded her first album, “Stars Down to the Ground”, in Montana, commissioned by the Montana Artists Refuge—“the first time I’d been
treated as a royal composer,” Hilts jokes.

And now she has released the Lyric Fury CD. “The group only expands my version of what the music should be, of who I am musically as a person,” she says. “It’s a real labor of love.”

Cynthia Hilts and Lyric Fury will celebrate the release of their new CD in New Jersey with a performance at Trumpets Jazz Club in Montclair, NJ, on March 25th. Looking ahead, the bandis also booked at New York’s Baha’i Center, part of the Jazz Tuesdays series, on April 18; and at the Jazz on the Lake Festival in Lake George, NY September 16-17.
What's been happening lately with Lyric Fury - Check out great pix of the Brooklyn CD Release Party by photographer Ted Todorov. Featuring in such excellent events as JazzConnect's "Jukebox Jury" by Dr. Brad Stone and PRI's (Public Radio International) "Jazz Happening Now" show on various NPR stations. Airplay from Honolulu to Paris, and nationwide. Also got a nice review on AllAboutJazz.com "Lyric Fury is a bold and creative project deserving as much exposure as possible." Lyric Fury has recently been featured in NYC's monthly jazz source, Hot House jazz magazine. And we look forward to a feature of composer/bandleader Cynthia Hilts, in May's Downbeat magazine.