WHEN: Saturday, April 8th, 2017, from 3:00 until 5:00 PM.
WHERE: Chatham Playhouse, 23 North Passaic Avenue, in Chatham.
ADMISSION: Admission at the door is $20 and is open for anyone 14 years old and older. Spaces are limited - please reserve yours by sending your name, age, contact number /address to ChathamWorkshops@gmail.com

The class will consist of finding the song that fits, based on your skill, your taste and your needs--a process of discovery! What song shows off the best parts of your voice, your personality, the character you are auditioning for? Choosing the right song is a crucial factor in who ends up capturing attention and landing the part. Bring your best audition songs and learn how to best deliver that winning performance!" 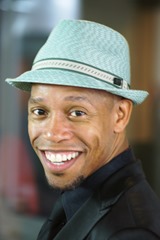 Ty Stephens is an award-winning singer/songwriter, entertainer/recording artist (Grand Prize Winner Jazzmobile/Anheuser-Busch Solo Jazz Vocalist Competition, NYC, 2006, and First Place Winner R&B/Blues Category of the International Songwriting Competition 2002, for "Somethin’ Strange"). He is also the Co-writer and an original cast member of "From My Hometown," Co-writer/Production, Choreographer and Star of the long-running "Shades of Harlem" revue show, and Co-writer/Production, Choreographer and currently starring in the new touring hit, "On Kentucky Avenue" (Songbirds Unlimited Productions/StepForward Entertainment). Ty appeared on Broadway in the original productions of Sophisticated Ladies (with Gregory Hines and Phyllis Hyman) and Marilyn, An American Fable..

In the Spring of 2010, Ty joined with vocalists from Broadway's The Lion King singing on the recording of the Soundtrack for the World Cup. He has performed/appeared with: Harry Belafonte, Gregory Hines, Phyllis Hyman, Toshi Kubota, Patti Austin, Jeffrey Osborne, Phoebe Snow, Smokey Robinson, Jon Hendricks; at Carnegie Hall with Liza Minnelli and Natalie Cole, (Laurie Strauss Leukemia Foundation Benefits)

The Chatham Community Players has been entertaining residents of Morris County and the surrounding area since 1922. The organization’s mission is to produce high-quality theater for a diverse audience, while elevating its standard of excellence and providing a creative outlet with educational opportunities and outreach programs. For more information, including details of CCP’s 2016-2017 season, visit www.chathamplayers.org.