What a peculiar world we live in! Things change so fast that words we thought we knew turn out to mean something entirely different. This comes across clearly in the fresh and funny play, The Surrogate, by Patricia Cotter, now having its world premiere by the Centenary Stage Company. 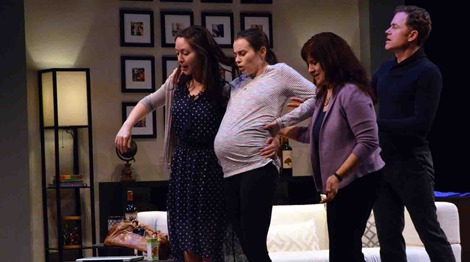 The play’s title is just one small example of how the world is changing. It has nothing to do with the legal system. It refers, instead, to a woman who is carrying a pregnancy for another woman, in a sense lending her body to produce a baby for someone else. (Above, L-R: Diana Cherkas, Caitlin Duffy, Susan Barrett and Clark Carmichael)

We do not meet Crystal, the title character, until well into the play. Virtually the entire first act is spent setting the scene, which it does brilliantly, bubbling with sharp-edged wit. We meet Billy and Sara, the couple for whom Crystal is carrying a baby boy. They already have a toddler, Tallulah (off stage but vividly “present” as a voice from a baby monitor).

The couple have dinner guests, Margaret, a close friend of Billy’s, and Jen, her lesbian partner. After a great deal of wine, and seemingly endless videos and stories about Tallulah, Billy and Sara tell their guests about the coming baby. Then they present Margaret and Jen with the news that if Billy and Sara both die, they have been chosen to raise the two children. Margaret, in her 40s and never having had children, and Jen, 50 and the mother of two adults, are horrified. Smiling and expressing how flattered they are to have been asked, they get out the door as fast as they can. 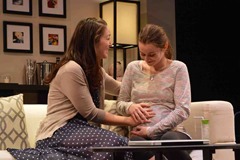 When Crystal does appear, she is uncomfortable with Billy and Sara and instead goes to stay with Margaret and Jen. In the course of conversations, the characters and motivations of the women emerge. The relationship between Margaret and Jen is explored in sweet and loving depth. Crystal is revealed as bright and ambitious, with an unexpected maternal streak. (Right: Diana Cherkas and Caitlin Duffy)

The final character is Rita, Sara’s mother, who lives in New Zealand, where she is a vintner. She unwittingly has financed the surrogacy and potential arrival of the new baby, believing she was giving money to renovate her daughter’s kitchen. Now she informs Sara and Billy that she is coming to San Francisco for surgery and will be staying with them. The complications are rapidly evolving into a Gordian knot.

Directed with boundless energy by Shelley Delaney, this moves along at a pace that is breathtaking. The ensemble cast performs brilliantly, with special kudos to Clark Scott Carmichael, the only man in the group, who manages not to fall into any of the usual male stereotypes. 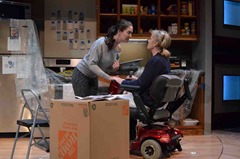 Katrina Ferguson and Susan Barrett are wonderful as Margaret and Jen, a couple of adults in love and exploring where they belong. As Crystal, Caitlin Duffy gives her character real depth. Diana Cherkas is outstanding as Sara, more than a little rigid and having difficulty figuring out what maternity means to her. And Centenary’s own Catherine Rust is wonderfully ascerbic as Sara’s mother, Rita, driving around the stage in a motorized scooter, spackling a wall while deliver lines that could cut glass. (Above, left: Diana Cherkas and Catherine Rust)

My favorite moment in the play is when Sara comments that her mother has been reading bedtime stories to Tallulah from the obituaries.

This is a very funny play but a deep one as well. If there are any flaws, they have to do with technology. Noises that come from laptops, even if they are actually actors offstage, are often hard to decipher, at least in the back rows of the theater.

We can’t say enough about the brilliance of the stage sets. Turntables (turned, we are told, by human power, because otherwise they make noise) enable the play to be presented on five different sets, designed by Tim Golebiewski, each exquisitely detailed and realistic. I have never seen better sets on any stage.

The Surrogate will run at the Sitnik Theater at the Lackland Performing Arts Center on Centenary’s Hackettstown campus through March 5.

Go to www.centenarystageco.org or call 908-979-0900 for more information about The Surrogate and the upcoming series.