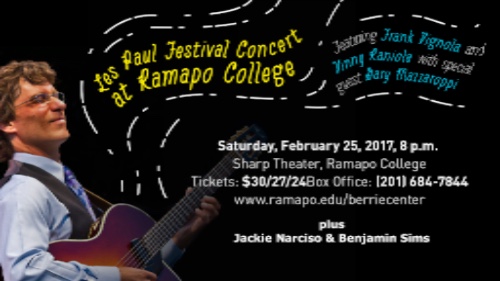 Guitarists Frank Vignola and Vinny Raniola
To Headline the

Frank Vignola’s stunning virtuosity has made him the guitarist of choice for many of the world’s top musicians, including Ringo Starr, Madonna, Boston Pops, New York Pops, and guitar legend Les Paul, who named Vignola to his “Five Most Admired Guitarists List.”

At 28, Vinny Raniolo has already proved to be among the elite having performed and recorded with Bucky Pizzareli, Tommy Emmanuel and David Grisman.

Frank and Vinny will be joined by Bassist Gary Mazzaroppi for this special performance. Ramapo singers Jackie Narciso and, from England, Benjamin Sims will open the show. Come and join us for a wonderful evening!