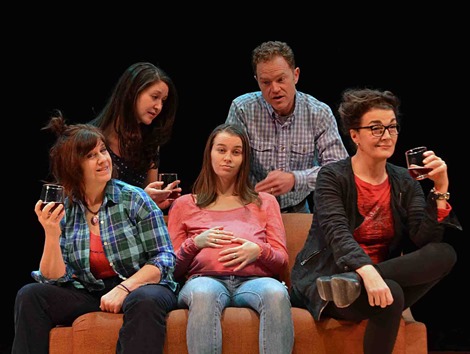 THE SURROGATE
by Patricia Cotter

WHEN: February 17 through March 5; Thursdays, February 23 and March 2 at 7:30pm; Fridays, February 17, 24 and March 3 at 8pm; Saturdays, February 18, 25 and March 4 at 8pm;  Sundays, February 19, 26 and March 5 at 2pm and Wednesdays, February 22 and March 1 at 2pm.  Buffet Matinees will be available during the run of this production, on Wednesdays (Feb 22 and Mar. 1) for groups of 25 or more
WHERE: Lackland Performing Arts Center (LPAC), 715 Grand Ave., Hackettstown
TICKETS: $17.50 to $27.50 with discounts for students and children under 12.  Buffet Matinees are $42.50/person and advance reservations are required.  A special Centenary alumni discount of $10.00 off adult ticket price is available for Friday evening performances.  Thursdays are “Family Night” at CSC , with a special “rush”  ticket price of  buy one/get one free on the regular $25 ticket,  when tickets are purchased in person at the CSC box office, as early as, two hours prior to performance time.

For more information or to purchase tickets visit www.centenarystageco.org or call the CSC box office at (908) 979 – 0900. The box office is open Monday through Friday from 1 – 5pm and 2 hours prior to every performance.  The CSC box office is located in the Lackland Center; 715 Grand Ave. Hackettstown, NJ.

Famed Groundlings Theatre in LA alumna – which gave birth to such SNL actors as Phil Hartman, Lorraine Newman, and the Pee Wee Herman phenomenon – and Emmy Award winning author, Patricia Cotter, brings her unique sense of comedy and contemporary issues to Centenary Stage Company with the World Premiere of The Surrogate.

Winner of the 2016 Susan Glaspell Award and finalist in the prestigious 2016 O’Neil National Playwrights Conference, The Surrogate is a smart and funny play about blended families, desire, motherhood, class and sexual politics examining just how much we can ask of our friends, our parents and our spouses, and whether we’ll get any of our important life decisions right in this new age.  A multigenerational blend of “Modern Family” and  "All in the Family"  for the 21st century, when Billy and Sara ask their best friends Margaret and Jen to be the guardians of their precious Tallulah (and yet - to - be - born baby Carroll), lives change and friendships are tested.  When Sara’s mother, a colorful New Zealand Vineyard owner, blows into town for an “ankle replacement”, the definition of what makes a modern family is hilariously rewritten.

Cotter has received the American Academy of Arts and Letters and the Richard Rodgers Award for musical theater, as well as the L.A. Stage Ovation Award.   Her plays include Rules of Comedy performed by The Actors Theatre of Louisville; When You Talk About This, Best of Playground 18,   San Francisco; and The Break Up Notebook (featuring actress Jane Lynch).  Cotter also wrote the musical Rocket Science: A Musical, and co-wrote the cabaret show, So Far – Beth Malone (Joe’s Pub, NYC), and she adapted Mulan, Jr for Disney Theatrical.  Cotter will be in residence at CSC during the play’s development, and a special talkback with the Playwright will be held on Sunday, Feb 19 following the 2 PM matinee performance.

The Surrogate features a cast of new and returning Centenary Stage Company favorites including Diana Cherkas, Katrina Ferguson, Susan Barrett, Clark Scott Carmichael, Caitlin Duffy and CSC’s own Catherine Rust.  No stranger to Centenary Stage Company, audiences will remember Cherkas from her roles in The Unfortunates, Loose Knit and A Laughing Matter.  Cherkas’ other regional work includes the American Globe Theater, Bickford Theatre, Baltimore Shakespeare Festival, as well as, a host of television and film credits.  Katrina Ferguson returns to Centenary Stage Company with CSC credits including The Poetry of Pizza, You May Go Now, Inventing Montana and Quartermaine’s Terms.  Ferguson’s other credits include work at Oldcastle Theatre, Dorset Theatere Festival, the historic Ivoryton Playhouse, Bickford Theatre, Womens’ Theater Company NJ, NJ Rep and National Shakespeare Company among many other regional and US National Tour credits.  Also returning is Susan Barrett.  Barrett was last seen at CSC in Neil Simon’s, The Prisoner of Second Avenue.  Other credits run the gamut of film and television to Off-Broadway, regional and international theater; including work on “30 Rock”, the 29th Street Rep, The Harlem Shakespeare Festival, NY Fringe Festival, Asolo Repertory Theatre, Metropolitan Playhouse, The Bickford Theatre, Womens’ Theatre Company of NJ and internationally at the Donegal Workshop Theatre and Edinburgh Fringe Festival.  Finally, CSC’s own Catherine Rust graces the Sitnik stage once again.  Previous recent CSC credits include Becky Shaw and The Cripple of Inishmaan.

New to Centenary Stage Company are Clark Scott Carmichael and Caitlin Duffy.  Carmichael joins the cast of The Surrogate after a recent turn at The Bickford Theatre as Inspector Ruffing in Ravenscroft.  Other work includes Jumper on Broadway in Tom Stoppard’s, Jumpers, Dreamcatcher Rep, The Shakespeare Theatre of New Jersey.  Regional and Off – Broadway credits include Repertory Theatre of St. Louis, Irish Rep, Hartford Theatre Works, Two River Theatre Company and the NY Fringe Festival among many others.  Film and television credits include Gotham, House of Cards, Law & Order, Boardwalk Empire and the recently released Hard Sell starring Kristen Chenoweth.  Caitlin Duffy also makes her CSC debut.  Originally from Vermont and now based in New York City, Duffy has worked at the Random Access Theatre Company, PTP/NYC at Atlantic Stage 2 and The Signature.