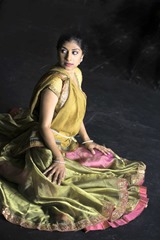 HONOUR: Confessions of a Mumbai Courtesan

Borderless, the new series by Jersey City Theater Center (JCTC) at Merseles Studios that runs through March, brings a diverse array of new and emerging voices to JCTC audiences with a comprehensive range of art, theater, readings and performances. JCTC series explore topics global in scope yet relevant to the community; Borderless examines the personal and political consequences of 21st century globalization.

“Jersey City is one of the most diverse cities in the country,” said Olga Levina, Artistic Director. “Borderless is all about giving voices to those who are often under represented. Dipti brings to life stories of people living outside of society and highlights universal truths about the humanity we all share.”

Based on interviews with Mumbai sex workers and other research conducted by the playwright, HONOUR: Confessions of a Mumbai Courtesan is a deeply moving, coming-of-age story of a girl growing up in a brothel. Other ‘characters” include her mother. eunuch, priest and pimp. Both Funny and heart-breaking, this poignant, one-woman performance depicts the exotic yet dangerous reality of Mumbai's brothels.

Five percent of all proceeds from the JCTC presentation of HONOUR: Confessions of a Mumbai Courtesan will be donated to ApneAap Women Worldwide, a grassroots Indian organization dedicated to ending sex trafficking. (www.apneaap.org).

“HONOUR: Confessions of a Mumbai Courtesan, is an attempt to break stereotypes,” said Dipti Mehta. "Art and theatre can create lasting social change. JCTC's Borderless and our show are collaborating to create a better world.”

Dipti Mehta, currently a Jersey City resident, was born and raised in Mumbai. Her numerous film and television credits include: The Blacklist (NBC), and The Golden Boy (CBS). In addition to acting and writing, she also holds a Ph. D in Molecular and Cellular Biology and works at Memorial Sloan Kettering Cancer Center in prostate cancer research.

HONOUR: Confessions of a Mumbai Courtesan is directed and dramaturged by Mark Cirnigliaro who has worked extensively in theatre for the past 16 years. Recent directing credits include the World Premiere of The Hounds of War by Bill Holland which Broadway World called, “A must see,” and the critically acclaimed production of The Judgment of Fools by Bernardo Cubria for INTAR Theatre.