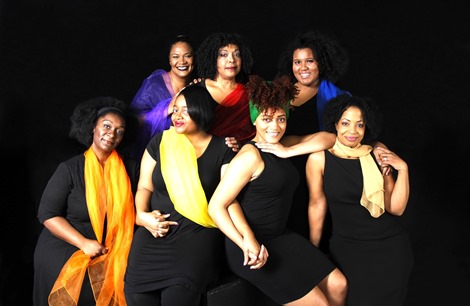 WHEN: February 16 and February 17 at 7:30 pm
WHERE: Westminster Arts Center on the campus of Bloomfield College, 449 Franklin Street in Bloomfield.
TICKETS: $15. Tickets may be reserved by calling 973-996-8484. Visa, MasterCard, American Express and Discover are accepted.
Tickets may also be purchased online and additional information is available at www.4thwalltheatre.org

4TH WALL TH EATRE continues its 20th anniversary season with a staged reading of Ntozake Shange’s ground-breaking play for colored girls who have considered suicide when the rainbow is enuf. The piece is billed as a “choreopoem” and weaves together 20 separate poems with music, movement, and narratives to tell the stories of love, empowerment, struggle, and loss in a complex representation of African-American sisterhood. The cast consists of seven nameless African-American women only identified by the colors they are assigned. The show first premiered at the Henry Street Settlement, Joseph Papp's Public Theatre, and later moved to Broadway.

for colored girls… first took shape in 1974 as an electrifying performance by Shange and four of her close friends in a Berkeley, California, women’s bar called the Bacchanal. As they moved and danced, they recited Shange’s poems about coming of age, heartbreak, sexual assault, and redemption. The choreopoem went on to win the 1977 Obie and was nominated for Tony and Grammy awards. Time Magazine called it "A poignant, gripping, angry and beautiful work."

4th Wall’s production will not be fully produced with sets and costumes, and the performers may carry scripts. The characters will be fully drawn, and the storytelling will be the focus of the production.  The production features Lauren Pope Forbes of South Orange, Mimi B. Francis of New Brunswick, Samille Ganges of Jersey City, Nicolette Lynch of Irvington, Lynette Sheard of West Orange, and Dana P. Hawkins and Deirdra Hooker, both of East Orange.  The show is directed by Gwen Ricks-Spencer, 4th Wall founding member, and current Executive Director.

“This piece holds a very special place in my heart,” says director Ricks-Spencer. “It was the very first show I ever saw on Broadway and it made a lasting and profound impression on me,” she continues.  “I was excited at the idea of directing the stage version, because so many people only know the 2015 movie by Tyler Perry. The play has an immediacy and intimacy that is palpable on the stage. It also provides an opportunity for the audience to hear all of the poems that make up the piece. There were shortened versions of several of them in the movie.”

The show contains mature subject matter; please use discretion when considering bringing children under 16. The show will be followed by a brief discussion for those who are interested.