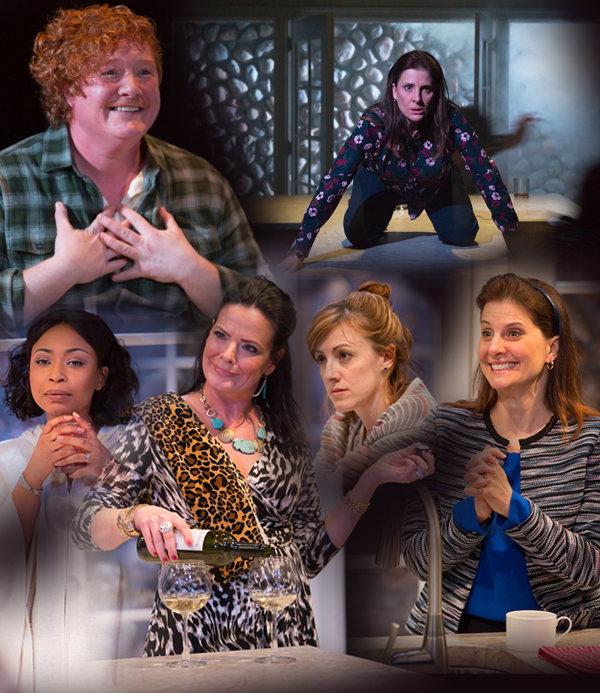 WHEN: Saturday, January 14 - Sunday, February 12, 2017; Opening: Friday, January 27, 2017 at 8pm
WHERE: Two River Theater Company’s Marion Huber Theater, 21 Bridge Avenue, Red Bank
TICKETS: range from $50 to $70, with discounts available for groups, seniors, and U.S. military personnel, their families, and veterans.
A limited number of $20 tickets are available for every performance; $20 tickets may be partial view.
Tickets for patrons under 30 are $20 and include the best available seats at every performance. Tickets are available from www.tworivertheater.org or 732.345.1400.

In Hurricane Diane, Madeleine George turns the Greek god Dionysus into Diane (Becca Blackwell), a lesbian separatist permaculture gardener from Vermont whose mission is restoring the Earth to its natural state—and gathering acolytes. Where better to begin than a tidy suburban cul-de-sac in Red Bank, New Jersey, populated by four women: Sandy (Mia Barron), Renee (Nikiya Mathis), Pam (Danielle Skraastad) and Beth (Kate Wetherhead)? As Diane changes their yards into a wild wonderland of paw-paw trees and chokeberry bushes, she sets out to draw the women into her ultimate plan: to stage a bacchanal in her forest garden, and usher in a new era of Dionysian worship in the dying days of the American empire, as the planet warms and the oceans rise.

“Red Bank is a coastal community, and climate change is as much an issue on the Jersey Shore as anywhere,” says George, who wrote Hurricane Diane as a commission for Two River Theater. “I was eager to write a play that both rolls out a welcome mat in front of the theater, inviting people in and making jokes that specifically enfranchise them, and also offers people the chance to interrogate their own feelings about these climatic shifts that are happening whether we’re ready for them or not.”

Madeleine George is the Pulitzer Prize-nominated author of The (curious case of the) Watson Intelligence. Her other plays include Seven Homeless Mammoths Wander New England, which had its world premiere at Two River in 2011. She is currently Two River’s first Playwright-in Residence, funded through The Andrew W. Mellon Foundation’s National Playwrights Residency Program (NPRP). Leigh Silverman, a two-time Obie Award-winner, most recently directed Sweet Charity starring Sutton Foster for The New Group. She earned a Tony Award nomination for her production of Violet. She directed Ethan Lipton’s No Place to Go at Two River in 2012.

Choreographer Sonya Tayeh has garnered acclaim for her work in the worlds of dance and theater, including two Emmy nominations for So You Think You Can Dance (2015 and 2013) and the 2014 Lucille Lortel Award and an Obie Award for her work on David Henry Hwang’s dance-play Kung Fu. American folk/rock duo The Bengsons have performed their music worldwide. Their recent credits include you'll still call me by name (New York Live Arts), Hundred Days (Under the Radar Festival), and So You Think You Can Dance (2012-2015).