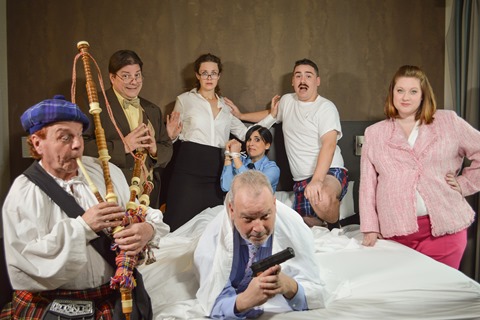 WHEN: Fridays, Jan. 20 and 27 at 8 p.m.; Saturdays, Jan. 21 and 28 at 8 p.m.; and Sundays, Jan. 22 and 29 at 2 p.m. A reception with the cast and crew follows the opening night performance on Jan. 20.
WHERE: Kelsey Theatre is located on the Mercer County Community College West Windsor Campus, 1200 Old Trenton Road.
TICKETS: $18 for adults, $16 for seniors, and $14 for students and children.
Tickets are available at www.kelseytheatre.net or by calling the Kelsey Theatre Box Office at 609-570-3333.
Kelsey Theatre is wheelchair accessible, with free parking available next to the theater.

What do two cops, three crooks, eight doors, and a kilt-wearing killer have in common? They’re the moving parts in Unnecessary Farce, to be presented by The Pennington Players at Mercer County Community College’s (MCCC’s) Kelsey Theatre. Seven actors deliver up the laughs.

This classic farce, which features slapstick and pratfalls galore, pairs with a contemporary American plot. In a hotel room, an embezzling mayor is supposed to meet with his new accountant. In the room next door, two undercover cops are supposed to catch the meeting on videotape. But there’s some confusion as to who’s in which room, who’s watching the video, who’s taken the money, who’s hired a hit man, and why the accountant keeps taking off her clothes. If it sounds confusing, it's all part of the fun!

Says Director Peter Bisgaier, “Good farce can be very challenging. The actors do a lot of physical comedy, including some stage combat, combined with dialogue and dialect that are key to the plot. Our production team is creating side-by-side motel rooms with a total of eight doors. We are having a lot of fun at rehearsals and are looking forward to sharing it with our audience. It is a very silly, very zany show.”