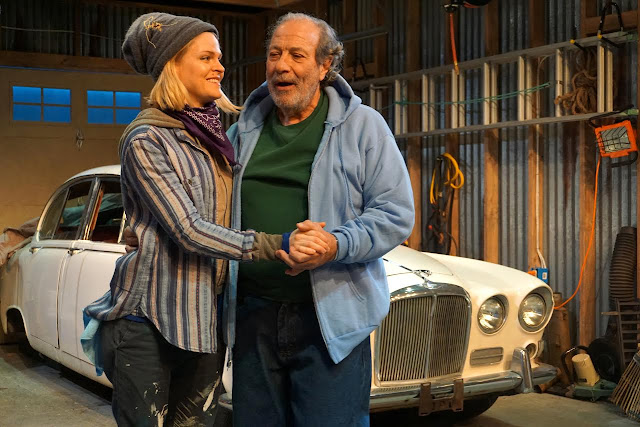 Let's start by addressing the elephant in the room. In this case, the elephant is a car and the room is the 18' x 25' stage of NJ Rep. Yes, readers, the current world premier now playing on the tiny Long Branch stage features an actual 1967 Jaguar automobile. It's a tribute to the Rep's typically excellent production values that this remarkable feat was possible. It's also a tribute to Gino Dilorio's typically high caliber writing that the the car doesn't upstage the play itself. Having a real car on stage may be a first for the the Rep, but it has been done before. Alan Ayckbourn's Just Between Ourselves (1976) also had a garaged automobile as the center of its narrative and in Richard Dresser's Rounding Third (2002) a passenger van served as refuge for two middle-aged little league coaches, just to name two. (Above: Estelle Bajou and Dan Grimaldi)

If you're thinking that the much-coveted car is more dramatic symbol than status symbol, you'd be correct. In this case, the Jag represents those bucket list projects that keep many of us going. The play is set in a suburban garage where Leo (nicknamed Chick) and his son Donald (dubbed Bone), work to restore the car with local jobber Carla. Irascible Chick has lost his sight from macular degeneration and must rely upon Bone and Carla to help him finish the project he started with his now-deceased favorite son, David. Bone is eager to finally sell the car to pay off some serious gambling debts.

As you might guess, the fuel this JAG runs on is a tankful of high test friction between Chick and Bone. Although some might say that the car is the play's fourth character, it is actually dead David who's presence looms large in the garage, completing the mechanics quartet. If this were a farce, it might facetiously be titled “My Brother the Car,” but it's not that sort of play. That's not to say it isn't funny, (Chick: “I'm not an alcoholic, I'm a drunk. Alcoholics go to meetings.”) but THE JAG is more a well-written character study with revealing spurts of wry humor than an out-and-out comedy.
Driving THE JAG (forgive the pun) is veteran director Brendan Burke, who has assembled a fine cast. As Chick, Dan Grimaldi is convincingly blind as well as convincingly gruff. Christopher Daftsios' Bone offers a nice mix of quiet sensitivity and masculine (Italian-American) pride.

But it is Estelle Bajou as Carla who is the play's most enigmatic and delightful creation. Carla is an eccentric out lesbian with a sweetly quirky personality. She hates cars, but has a passionate personal devotion for Jaguars. This is the kind of character that might derail the entire play if not properly cast. Thankfully, Bajou is absolutely perfect. She may even be a bit too perfect for the current JAG. Although Grimaldi and Daftsios' father / son conflict is truthfully portrayed, it also rings a tad familiar. (Above: Dan Grimaldi and Christopher Daftsios)

The dynamic created between Carla and Chick, however, becomes increasingly fascinating and truly unique. The brief stage time they share makes us long for a second act that further develops this odd couple. If Dilorio expands THE JAG beyond its 90-minute running time, let's hope this pair are in the front seat. As it is, THE JAG is still a satisfying theatrical joy ride.

THE JAG, a world premiere by Gino Dilorio, is onstage through February 12th at the New Jersey Repertory Company, 179 Broadway, Long Branch, New Jersey. For tickets and further information visit www.njrep.org or call 732.229.3166