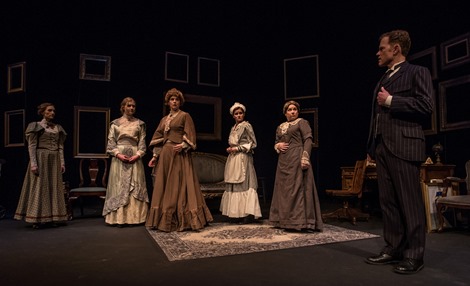 Well, this has been an interesting week. We learned that there are objective, verifiable facts, and then there are alternative facts. We have learned that some people live in a real world, while others reside in fantasy land. Sometimes, we may not be able to discern which is which. (Above L-R: Katrina Klein, Erin Farrah, Molly Garner, Jessica Sroczynski, Gloria Lamoureaux and Clark Carmichael

No, I am not talking about Donald Trump’s first week as President of the United States. This is the dilemma facing Police Inspector Ruffing in Don Nigro’s Gothic thriller, Ravenscroft, when he comes out, in the midst of a raging snow storm, to an isolated manse in rural England to investigate the headlong death plunge of Patrick Roarke, the estate’s footman—and, it seems, Lothario!

Part parody, part sleuth-style mystery, this Gothic thriller, now onstage in a charmingly twisted production at the Bickford Theatre, has been updated with a psychological slant. Despite the fact that there are enough red herrings for a fish hatchery and the final explanation is almost as complicated as the investigation, this rendition of Ravenscroft manages to retain the creepiness of a remote estate, the coincidence that Patrick is not the only male to meet his demise on the steps, Ruffing’s fixation on his dead wife and weirdness of the female characters—on an evocative set designed by Jim Bazewicz and eerily lit by Roman Klima. Eric Hafen’s sure directorial hand is evident as the action hums along inexorably to keep the audience’s attention from flagging, especially in the rather long second act. 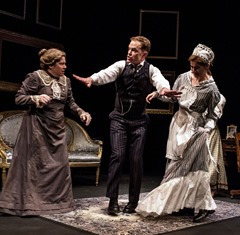 Without giving away too much, suffice it to say that Patrick has fallen to his death after being pushed away by the beautiful governess Marcy Kleiner in the midst of an altercation when she spurned his sexual advances. Inspector Ruffing, full of Victorian male preconceptions about woman, accuses Marcy of murder, only to have that supposition turned on its head by the alternatively clashing accounts of the accident by a dithering Mrs. Ravenscroft, her ditsy daughter Gillian, the hysterical maid Dolly and the stoic cook Mrs. French. While the solution is almost too complex to parse, we are left with the notion that the truth, indeed, is often fluid and based on perception. (Left: Gloria Lamoureaux, Clark Carmichael and Jessica Sroczynski)

Hafen has assembled a truly professional cast for this melodrama. Clark Carmichael is masterful as Inspector Ruffing, adrift in a sea of prevaricating women as he attempts to conduct a professional investigation. Officious, pompous in Act I, Carmichael becomes looser in the second act as he continuously imbibes brandy, stumbling and slurring his speech a bit while trying to maintain some dignity. As Mrs. Ravenscroft, Molly Garner deliciously conveys a character given to misunderstanding words and ideas (a la Richard Brinsley Sheridan’s Mrs. Malaprop); she’s alternately loopy and conniving. One wonders if her dippiness isn’t calculated. (Below: Clark Carmichael attempts to get the truth from Mrs. French and Mrs. Ravenscroft, played by Gloria Lamoureaux and Molly Garner, respectively.) 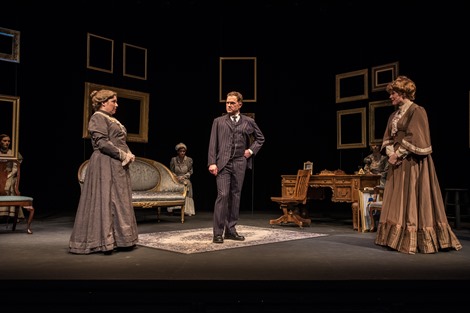 Erin Farrah’s Gillian is true child-woman, skipping around the room, giggling incessantly, yet smart enough to try to butter up Ruffing by asking personal questions. Maddeningly immature, she is still a force to be reckoned with as the women make Ruffing’s head spin. As Mrs. French, Gloria Lamoureaux is a stolid, stoic, sober servant, yet we sense by her guarded mien that she’s hiding something. And Jessica Sroczynski is terrific as Dolly, always on the verge of throwing up yet petrified of crossing her mistress or the detective.

Last but not least (and perhaps most important), Katrina Klein is superb as the intelligent, cool governess Marcy Kleiner. Although her Viennese accent unconvincingly wavers, Kleiner conveys the young woman’s steeliness and resolve, from the very first scene when she answers Ruffing’s questions with questions of her own, taking the reins of the investigation into her own hands. Despite his attempts to trip her up, she stubbornly sticks to her story, so that we really come to care about this foreign woman, accused by a powerful man of murder (without any facts) and forced to defend herself by her wits alone.

Hafen has staged the play in a novel way. When the characters are not involved in the action, they sit on stools at the back of the stage, so they are always there, even when they are not needed. The hanging, empty frames convey both the ancestry of the Ravencrofts as well as the emptiness of their existence in a remote area of England. Kaitlyn Frega’s costume selection (provided by Scaramouche Costumes) conveys the characters’ station as well as the late Victorian period; Dani Pietrowski’s props add to the impression. Stacks of books, a settee, an ornate desk transport us to the estate’s salon. And Andrew Elliott’s sound design adds to the play’s spookiness.

Fast-paced Ravenscroft is great fun, especially as the audience tries to figure out just what happened before Ruffing does—especially given his tipsiness as the investigation proceeds. If you enjoy whodunits and costume dramas with a twist of lime, Ravenscroft’s just the ticket on a cold winter night. The alternative facts and fantastical reality will not only make your head spin but give you a few laughs needed in these “interesting times.”

Ravenscroft will be performed at the Bickford Theatre in the Morris Museum, 6 Normandy Heights Ave., Morristown, through February 12. For information, performance times and tickets, call the box office at 973.971.3706 or visit www.morrismuseum.org online.