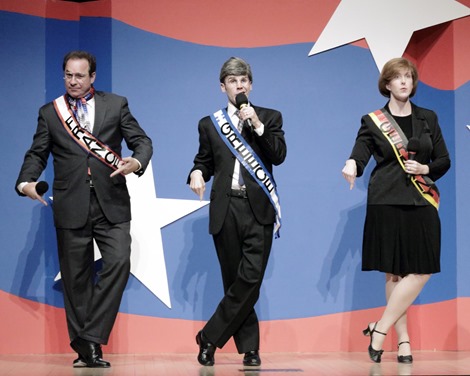 THE CAPITOL STEPS: WHAT TO EXPECT WHEN YOU’RE ELECTING

The Capitol Steps, a Washington DC-based comedy troupe that began as a group of Senate Staffers, returns to bergenPAC to present a show based on songs from their current album “What To Expect When You’re Electing.”

The Capitol Steps have been a Washington, DC institution for over thirty years, providing a unique blend of musical and political comedy to our nation’s capital and more.  Each show consists of tasteful lampooning guaranteed to leave both sides of the political spectrum laughing. The troupe started in 1981, when John McCain was only 63 years old!  Since then, they have appeared on “The Today Show,” “Nightline,” “CBS Evening News” and for many years in specials for National Public Radio.

Their show is constantly changing, strenuously bi-partisan, and includes songs about the election madness, as well as other things in the news, such as “How Do You Solve a Problem Like Crimea,” “Ain’t No Pipeline, Now It’s Gone,” and “The iMpossible iWatch.”

If you’ve ever wanted to see Hillary Clinton sing a show tune, Donald Trump sing a rock song, and New Jersey Governor Chris Christie do a classical ballet, this might just be the show for you!