MURDER IS A REAL HOOT @ THE BERGEN COUNTY PLAYERS 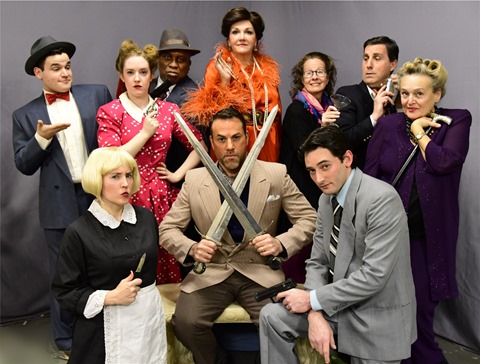 WHEN: January 14 through February 4, 2017; Fridays and Saturdays at 8pm, and Sundays at 2pm.
WHERE: Little Firehouse Theatre, 298 Kinderkamack Road in Oradell
TICKETS: $21 for Friday/Saturday performances and $17 for Sunday matinees
Tickets may be purchased online at www.bcplayers.org, by calling 201-261-4200 or by visiting the box office during regular box office hours. Visa, Master Card, and American Express are accepted.

Set in December 1940 in the library of an isolated Westchester country mansion in Chappaqua, New York, The Musical Comedy Murders of 1940 brings together the creative team responsible for a recent ill-fated Broadway flop (in which three chorus girls were murdered by the mysterious "Stage Door Slasher"). The house is replete with sliding panels, secret passageways and identities—all of which figure diabolically in the comic mayhem that follows when the infamous "Slasher" makes his reappearance and strikes again—and again. As the composer, lyricist, actors and director rehearse the backer's audition for a new show, a blizzard cuts off any possible retreat, bodies start to drop in plain sight, knives spring out of nowhere, masked figures drag their victims behind revolving bookcases, and accusing fingers point in all directions. The guests must plow ahead to solve the mystery and unmask the "Slasher" before it is too late!

The Musical Comedy Murders of 1940 was first performed at the Circle Repertory Company in New York City, later moving to Broadway in 1987 at The Longacre Theatre where it enjoyed a critically-acclaimed run.

Both productions were directed by the playwright and shared the same cast. The play is said to have been based on several 1940s mystery movies, including The Cat and the Canary, one of Bob Hope's first films.

A Life Member, Past-President, and Board of Governor, director Steven Bell of Hackensack has been active with the Players for over thirty years. He has directed numerous BCP productions, including The Drowsy Chaperone, Ruthless! The Musical, Urinetown, Modern Orthodox, Curtains, and The King & I, to name a few.

The Bergen County Players has grown tremendously from its roots as a small community theater when it was founded in 1932; today, nearly 300 volunteer members, working on and off stage, make possible the nine productions presented each season. The remaining Main Stage productions are Time Stands Still (February 18th to March 11th), Night Watch (March 25th to April 22nd), and Chapter Two (May 6th to June 4th). Remaining Second Stage productions include Patio/Porch, Impromptu (March 4th to March 5th), and Standing on Ceremony (June 10th to June 11th).