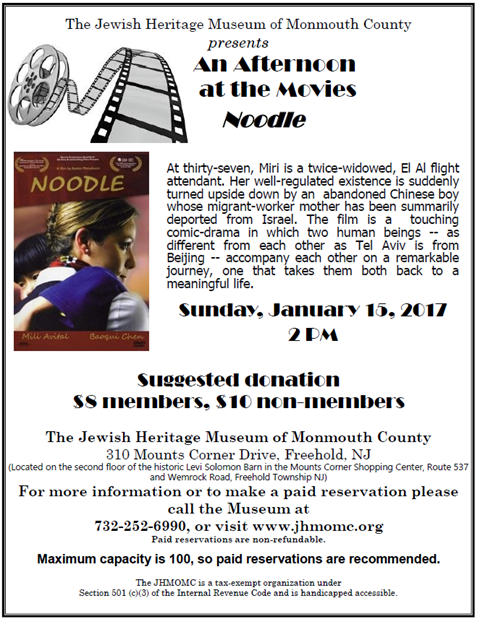 Noodle is an Israeli film which has earned several awards, including from the Israeli Film Academy.

Critic Jason Buchanan of Rovi describes the film as a story about “a melancholy Israeli flight attendant [who] finds new meaning in life on her quest to reunite a six year-old Chinese boy nicknamed Noodle [BaoQi Chen] with his missing mother. Miri, (Mili Avital) is a two-time war widow who has long since lost her lust for life and spends most days simply going through the motions. Miri lives with her sister Gila (Anat Waxman), who is currently wrestling with the troublesome prospect of ending her marriage to her husband Izzy (Alon Aboutboul). One day, upon returning home from work, Miri is recruited by the family's Chinese housekeeper (Vicky Lyn) to watch her young son as she runs an important errand. When the housekeeper mysteriously fails to return, Miri and her trusty airline coworkers make it their mission in life to reunite mother and son though whatever means possible.”

Suggested donation: $8 members, $10 non-members collected at the door. Take a break from the cold, and enjoy this heart warmer!

For more information or to make a reservation, call the Museum at 732-252-6990, or visit www.jhmomc.org. The Jewish Heritage Museum is located in the Mounts Corner Shopping Center, at 310 Mounts Corner Drive Freehold, NJ, at the corner of Route 537 and Wemrock Road (between the CentraState Medical Center and Freehold Raceway Mall). It is on the second floor of the historic Levi Solomon Barn. The JHMOMC is a tax-exempt organization under Section 501 (c)(3) of the Internal Revenue Code and is handicapped accessible.