Joseph Gallo, Mile Square Theatre’s playwright in residence says, “MST is committing time and energy now to nurture and develop playwrights as part of our mission. My latest play Long Gone Daddy was given a full development process, and then was produced as part of the company’s mainstage season in 2016. This year we are teaming up with John Pietrowski of Writers Theatre of NJ by hosting the New Plays New Jersey series. We plan to continue offering readings to our audiences and giving playwrights a platform for their work in development. We are also premiering Erin Mallon’s play The Net Will Appear in our Mainstage season in 2017. It’s exciting to see so much work being launched from our new space.”

Lydia just wants a one-night stand, so she’s met a guy at a bar and brought him back to her new apartment.  But now things keep getting in the way.  Like the fact that they could hardly be more different – she’s forty, he’s twenty-eight; she’s black, he’s white; she’s a New Yorker and he’s from the Midwest. And the fact that he’s actually hoping for something more. And the fact that her new apartment might very well be haunted. A play about ghosts— both literal and metaphorical —and the ways we try to move forward.

What Difference Does It Make?
by Deb Margolin
WHEN: February 12 @ 6pm
WHERE: Mile Square Theatre • 1400 Clinton • Hoboken, NJ
ADMISSION: FREE

Myrtle Schmidt is a top-notch attorney and pastry chef, solving cases on the phone while whipping up exotic confections in the Telephonocracy of Ding A Ling A Ling Land. Her long-suffering husband, Arnold, will do anything—anything—for just a moment of her precious time.  But Myrtle is so worried about being forgotten by the author who gives her life, she cannot pull away from her various pursuits, or her favorite Soap Opera—Marion’s Mistake, sponsored by KORO Feminine Deodorant-- until it may be too late.

Two brothers raised in the inner city, Glen and Walter, could not be further apart.  Glen, a carpenter, stayed close to his roots, never leaving the city, or the mindset that often comes along with it.  Walter, on the other hand, leaves home the moment he’s able, never looking back, and starts a new “white-washed” kind of life, complete with his new white wife Grace.  The only thing that could ever bring him back home is the death of his father.   When this happens, the collision of these two brothers and these two worlds, causes an impact that no one was prepared for.  Views are challenged on both sides, lives are altered, and everyone is permanently changed.

For parking information and directions: http://milesquaretheatre.org/directions.html

LIA ROMEO’s plays have been produced or developed at 59E59, Project Y, San Francisco Playhouse, the Lark, Abingdon Theatre, New Jersey Rep, Writers Theatre of New Jersey, Unicorn Theatre, HotCity Theatre, Orlando Shakes, Forward Flux Productions, Kitchen Dog Theatre, and elsewhere. She has been nominated for the ATCA/Steinberg Award for best new play, the NYIT Award for outstanding full-length play, and the L. Arnold Weissberger Award, and has been recognized by the Kilroys List (honorable mention), the O'Neill (finalist) and the Heideman Award (finalist). Her work is published by Playscripts and Smith & Kraus. She teaches in the graduate creative writing program at Fairleigh Dickinson University. BA: Princeton, MFA: Rutgers. 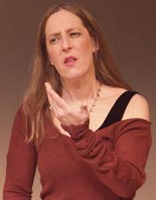 DEB MARGOLIN is a playwright, actor and founding member of Split Britches Theater Company. She is the author of ten full-length solo performance pieces, which she has toured throughout the United States, and is the recipient of a 1999-2000 OBIE Award for Sustained Excellence of Performance. Deb’s play O Wholly Night and Other Jewish Solecisms, a solo piece investigating the recondite and sexy nature of waiting for the Messiah, was commissioned by the Jewish Museum of New York. PS122 presented Three Seconds in the Key, a meditation on illness, love, basketball and Yiddish, in a workshop production in NYC; the play was premiered under the auspices of New Georges at Baruch Performing Arts Center. Her play Imagining Madoff was nominated in 2012 for the Helen Hayes Award for Outstanding New Play in Washington, DC, and for the Eliot Norton Award for Outstanding Production for its New England debut at New Repertory Theater Company in Boston.

KARA K. SHELTON (WRITER/DIRECTOR) is an actor, writer and director.  She is the director and one of the principal actors of the Abundant Harvest Drama Ministry of NJ. It is in this role that she uses her passion to reach out to the community, ministering through drama in detention centers, prisons, homeless shelters, and churches throughout the Northeast.  In addition to becoming a recipient of the 2015 Individual Artist Fellowship Grant for Playwrights from the NJ council on the Arts, she has also had her work featured at the 14th Annual Urban Media Makers Film Festival, and the “Take Ten!” ten-minute Play Festival.