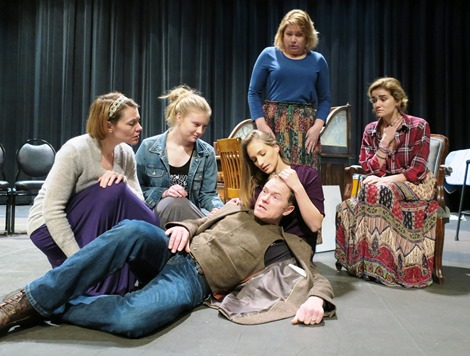 Ravenscroft
an English drawing room murder mystery and a comedy

Critics have praised the Don Nigro play as “written at the three-way intersection of Monty Python, Agatha Christie and Downton Abby.” Directed by Bickford Theatre Producing Artistic Director Eric Hafen, Ravenscroft is a production of the Morris Museum and Drew University.

The puzzler begins simply enough. On a snowy night, Inspector Ruffing is called to a remote house to investigate the headlong plunge of Patrick Roarke down the main staircase. Five alluring and dangerous women hold all the cards and all the answers: Marcy, the beautiful Viennese governess; Mrs. Ravenscroft, the flirtatious lady of the manor; Gillian, her charming but possibly demented daughter; Mrs. French, the formidable and passionate cook, and Dolly, a terrified maid. Ghosts on the staircase and skeletons in the closet intensify this psychological comic thriller with a twist. The suspense and laughter build to an uproariously chaotic conclusion.

Leading the cast of English oddballs is Inspector Ruffing played by Clark Carmichael of Montclair who most recently appeared on Broadway in Jumpers. Molly Garner of Bloomfield plays the hilariously wacky Mrs. Ravenscroft, Katrina Klein of New York City takes the role of Marcy, and Gloria Lamoureux of Succasunna plays Mrs. French. The production includes Drew University students Erin Farrah of Fayetteville, Arkansas as the often confused daughter Gillian and Jessica Sroczynski of Bayonne as Dolly.
“Combined with the thrill of a mystery, the laughter of a comedy, and the theatricality of its unique staging, Ravenscroft will play out in your mind as it does in the mind of our Inspector Ruffing,” says Director Eric Hafen. “We are pleased to bring this always popular show to the Bickford Theatre.” (Above: L-R Molly Garner, Erin Farrah, Clark Carmichael, Katrina Klein, Gloria Lamoureux, Jessica Sroczynski. Photo by Annie Belkin)

Ravenscroft is a delightfully unreliable murder mystery that will keep you guessing to the end. Who pushed Patrick Roarke down the stairs? You can be sure of two things: It wasn’t Colonial Mustard with a Candlestick. And you’ll be glad you didn’t miss the fun!

Gloria Lamoureux of Succasunna (Mrs. French) – NJ Regional:  Alliance Rep, Centenary Stage; other NJ Theatre:  Chatham Playhouse, Chester Theatre Group, Circle Playhouse, Holmdel Theatre Company; recipient of the NJACT Perry Award for Best Actress for the role of Shirley in Shirley Valentine at the Chester Theatre Group
Erin Farrah of Fayetteville, Arkansas (Gillian) – Senior at Drew University majoring in Anthropology and Theatre Arts; Theatre Credits:  Sandrine (Almost Maine), Baker's Wife (Into the Woods), Olive (Nothing is the End of the World Except for the End of the World), Rosalind (Moon Over Buffalo), Chloe (The Corporate Ladder)

Jessica Sroczynski of Bayonne (Dolly)– Senior at Drew majoring in Women's and Gender Studies with a minor in Film and Media Studies; Theatre Credits:  Kit/Waitress/Shona (Top Girls), Betty (Sure Thing)