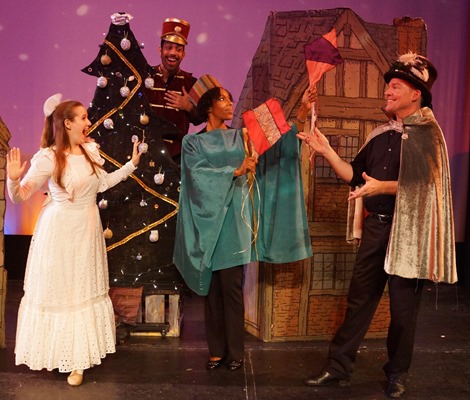 A Season of Miracles

WHEN: 11:00 am on Saturday December 3
WHERE: Union County Performing Arts Center, 1601 Irving St., Rahway NJ.
TICKETS: Single tickets are $15, with discounts for groups of ten or more. For single tickets, visit the UCPAC website or call the box office at 732-499-8226.
For group sales, contact Pushcart Players at 973-857-1115.
Family audiences on December 3rd will be able to “meet and greet” the cast members of each show after the performance.
For further information on this or any Pushcart Players program, visit the website www.pushcartplayers.org or email information@pushcartplayers.org.

This magical musical warms the hearts of family audiences with the true spirit of the December holidays of Christmas, Chanukah and Kwanzaa.

“A Season of Miracles” visits O. Henry’s ‘The Gift of the Magi;’ an original scene in Nigeria entitled ‘The Kwanzaa Kite;’ a story based on the wise men of Chelm folklore called ‘The Chanukah Miracle;’ and E.T.A. Hoffmann’s ‘The Nutcracker.’ Every tale reflects the spirit of the holidays and the people that celebrate them. Music and orchestrations are by Tony Award-winning composer, Larry Hochman, book is by Pushcart co-founder, Ruth Fost and direction is by artistic director Paul Whelihan.

“As for miracles?” noted Fost, “they are within us all and at the heart of each story. Miracles are the gifts of love, kindness, caring and sharing.”

Ruth Fost is a playwright, designer, actor, administrator and advocate for the arts, with a particular focus on arts in education. Fost has appeared in more than fifty leading roles in major productions ranging from Simon (Neil) to Shakespeare to Shaw. She has written 30 musical plays for children, has performed throughout the country and abroad and recently published a children’s book to accompany Pushcart’s production of “Alice in Wonderland.”

Larry Hochman is the Tony Award-winner for orchestrations for “She Loves Me” (2016 revival) and Tony and Drama Desk award-winner for “The Book of Mormon.” He received Tony nominations for “The Scottsboro Boys,” ”Monty Python's Spamalot,” (Hochman also received Drama Desk nominations for both), “Fiddler on the Roof” (2004 revival) and “A Class Act.”  Larry composed additional music for Disney’s “Little Mermaid,’ for Stephen Spielberg’s “Amazing Stories” and for numerous celebrity concerts.  Hochman’s other awards include the ASCAP Award for Musical Theater (“One Man Band”), 4 Emmy Awards for “The Wonder Pets” television series, and a Bistro Award for composing “One Man Band.”

Castillo has been a member of Pushcart Players for twelve years. A graduate of Kean University with a BFA in theatre, Oscar co-founded The Theatre Project and performs frequently throughout NYC with Peculiar Works Productions.

Stacie Gogo is a graduate of Wilkes University with a B.A. in Musical Theatre and a Minor in Dance. Gogo appeared off-Broadway as a Kit Kat Girl in “Cabaret” at the Players Theatre, as Penny Pingleton in “Hairspray” at the Westchester Broadway Theatre, in the ensemble of “Grease!” at Surflight Theatre, and in international tours. Lou Steele was recently seen off-Broadway at the Clurman Theatre in a production of “Baby” as Nick. Other credits include Radames in “Aida,” Chris in “Miss Saigon,” and Tony in “West Side Story” (Visit Steele’s website at www.lousteele.net).

Gia Ware performed in U.S. and International Tours as Deena Jones in “Dreamgirls,” and as Nehebka in “Aida. She has performed off-Broadway (New World Stages, 45th Street Theater and 777 Theatre), and regionally. She is the director and producer of the YouTube cartoon series, “Gia’s World.”

is the award-winning professional touring theater company specializing in arts education for children. Twice nominated for an Emmy©, Pushcart is the recipient of numerous state and private awards for excellence and innovation. A social-profit organization founded in 1974, Pushcart brings substantive musical theater, workshops, and residencies to young people and their families in schools and theaters nationwide. The company has traveled more than 6 million miles nationally and abroad, from the nation’s White House to the rural red schoolhouse.

Pushcart Players addresses social studies, literature, history, the Autism spectrum, special educational needs, and values clarification for young people, their families and their educators. All performances by professional artists (Actors’ Equity Association) are supported by study guides, post-performance assessments and other supplemental materials, and adapt to any location with innovative scenery, lighting and sound systems.