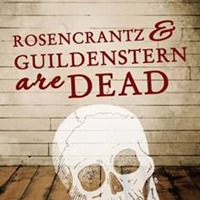 Dover Little Theatre is very proud to announce auditions for

Rosencrantz and Guildenstern are Dead
written by Tom Stoppard
directed by Derek Egidio.

NOTE: the lead roles of Rosencrantz and Guildenstern have already been cast.

Please come prepared to read and work from the script.

Acclaimed as a modern dramatic masterpiece, "Rosencrantz & Guildenstern Are Dead" is the fabulously inventive tale of Hamlet as told from the worm's-eye view of the bewildered Rosencrantz and Guildenstern, two minor characters in Shakespeare's play. In Tom Stoppard's best-known work, this Shakespearean Laurel and Hardy finally get a chance to take the lead role, but do so in a world where echoes of Waiting for Godot resound, where reality and illusion intermix, and where fate leads our two heroes to a tragic but inevitable end.