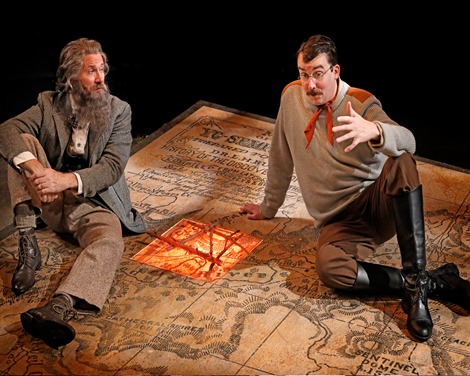 Just in time for the centennial of the National Park Service, Luna Stage presents the world premiere of King of the Mountain by Ben Clawson, the playwright responsible The Dangers of Electric Lighting, for the terrific play about Edison and Tesla, a couple of seasons ago.

This time out, Clawson and Luna Stage give us another mesmerizing encounter, this time between two champions of the natural world, President Theodore Roosevelt and the conservationist John Muir. Set in the Yosemite Valley in California, over the last three days of the longest Presidential trip 1903, the play portrays a private camping trip taken by Roosevelt and Muir; with no surviving record of their conversation, so Clawson has been free to recreate the discussion between the two men. 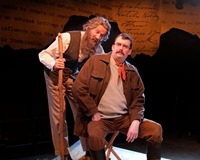 With only two characters, and 98% of the play dialogue, you might wonder how the playwright creates the conflict so necessary to drama. Well, the clash of wills, egos and agendas drives the play from the very first day of their meeting. For one thing, their reasons for meeting are very different. Roosevelt wants to escape politics for four days and relax in nature; Muir wants to discuss the defense of the Yosemite Valley against timber interests who want to cut down the great sequoias in the forest there. Roosevelt fancies himself a great naturalist, while the more laconic Muir keeps repeating his philosophy, “Pick out anything and you will find it hitched to the rest of the universe,” and calls Roosevelt a “nature faker.”

At the second and third meetings, the wrangling continues, with Clawson slipping in information about America’s Western expansion, Roosevelt’s sickly childhood and Muir’s immigrant childhood on a farm in Wisconsin to provide historic background and fill in the personal stories of the two. By the end of the 90 minutes, Roosevelt and Muir have come to a pretty good compromise. The more pragmatic Roosevelt agrees to create the Antiquities Act of 1906 to authorize presidents to proclaim and preserve landmarks, structures and other “objects of historic or scientific interest” as national monuments. The more idealistic Muir accepts the gesture, although he is still worried about protecting the Het Hetchy Valley from timber thieves. By the time the stage lights go down, you won’t really be sure just who is “King of the Mountains.”

The ingenious set by Christopher Swader and Justin Swader—actually a map of the Yosemite Valley unfurled on a platform of dirt and almost filling the playing space—eschews realism for metaphor and allows us to focus on the characters and dialogue. Jorge Arroyo’s light conveys the different times of day and weather conditions, even providing the flickering light of a campfire. With its bird songs, howling winds and running water, Andy Evan Cohen’s sound is spot-on for a play about nature.

Cheryl Katz’s energetic and efficient direction keeps the tension high throughout the play. As for the actors, Ian Gould (Above, right) as Roosevelt and Rik Walter as Muir are superb. Gould aptly portrays the bluster and pomposity of a man masking his vulnerabilities, obnoxiously interrupting Muir, boasting about his past, even sulking when Muir doubts his sincerity. He may be taller than TR, but the resemblance is good enough to convince us that he is the President. The lesser known Muir—famous for the grove of sequoias in Northern California that bear his name—is played by Rik Walter (Above left) with a convincing Scottish brogue and an earnest passion for nature. In the face of TR’s bluster, he is patience personified, and Walter manages to wring some black humor from the man’s economic speech. Best of all, both actors make us care about this topic, and we anxiously wait to see how it unfolds—even though we already know the outcome. That anticipation is a tribute to fine writing and acting.

For about 20 years, Luna Stage has been known for bringing new or little-known works to local audiences. It can be a hit-or-miss proposition and risky for a small theater. But once again, Luna and Ben Clawson have tackled a historic event, imbued with dramatic conflict, that has not only entertained us but has taught us something as well. In so doing, they have fulfilled one very important criterion of good theater. You won’t want to miss King of the Mountains.

King of the Mountains will be performed at Luna Stage, 555 Valley Road, West Orange, through October 30. Performances are Fridays and Saturdays at 8 PM and Sundays at 3 PM. For information and tickets, call the box office at 973.395.5551 or visit www.LunaStage.org online.