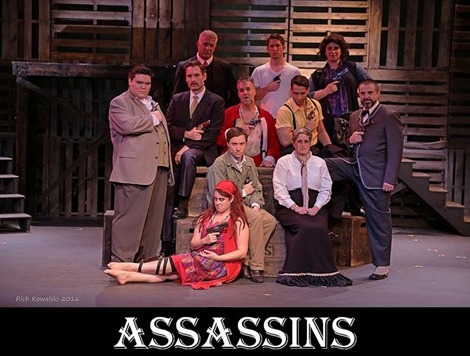 The Cranford Dramatic Club Theatre in Cranford NJ is proud to present Stephen Sondehim’s haunting and topical musical ASSASSINS as its opening show of the 2016-2017 season.

A multiple Tony Award-winning theatrical tour-de-force, ASSASSINS combines Sondheim's signature blend of intelligently stunning lyrics and beautiful music with a panoramic story of our nation's culture of celebrity and the violent means some will use to obtain it, embodied by America's four successful and five would-be presidential assassins. Bold, original, disturbing, and alarmingly funny, Assassins is perhaps the most controversial musical ever written. [Above: From Left to Right- Keith S. White, S. Gene Lough, Lauren Grof-Tisza, Zach Love] 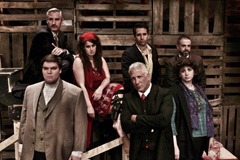 Director Alan Van Antwerp says, “In the weeks leading up to the election, there is never been a better time to produce a musical about the men and women who felt the peaceful transition of power we strive for every first Tuesday in November was not enough. ASSASSINS challenges us to see the stories behind those who felt alienated, lost, and forgotten and went to extreme measures to make their situation better.” [Left: (Left to right) Keith S. White, Lindsay Braverman, Shane Long, S. Gene Lough; Bottom (Left to right) Zach Love, Richard Colonna, Lauren Grof-Tisza]

The show’s Director is Alan Van Antwerp, the show’s choreographer is Megan Ferentinos, the show’s music director is Jack Bender, the show is produced by Elizabeth Howard and Joe Leo.

2016 marks The Cranford Dramatic Club’s 98th season.  The mission of the theatre is to provide quality, affordable theater for the area residents.

The Cranford Dramatic Club is a 501(c)(3) non-profit organization.  All donations are tax deductible to the full extent of the law.