WHEN: October 30 – November 5
WHERE: Maurice Levin Theatre, JCC Metrowest, 760 Northfield Ave., West Orange
TICKETS: $5 per screening for $12 for a package that includes a ticket to each film screened there. Tickets may be purchased at www.boxofficetickets.com/jccmetrowest.
For more information about films and discussions at this venue, contact Carol Berman, Director of the New Jersey Jewish Film Festival, at cberman@jccmetrowest.org or call 973.530.3421; you can also visit www.jccmetrowest.org online.

Since the passage of the Americans with Disabilities Act over a quarter century ago, public awareness of the disabled has increased, as has their greater acceptance in the workplace—even in the movies and on television.

Capitalizing on this interest, Montclair is the site of the ReelAbilities Film Festival, with screenings at Montclair State University and the JCC MetroWest in West Orange from October 30 through November 5, 2016. This event is part of the largest disability film festival in the country and is dedicated to promoting awareness and appreciation of the lives, stories and artistic expressions of people with different abilities. The festival will feature cutting edge and sometimes controversial films that challenge assumptions and promote discussion about ability and disability. 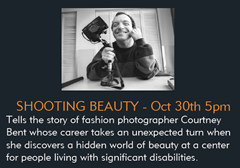 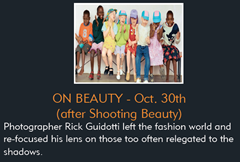 The festival kicks off with a collaboration with the New Jersey Jewish Film Festival, offering screenings at the Maurice Levin Theater in the JCC Metrowest Building, 760 Northfield Avenue, West Orange. The Sunday, October 30, screening at 5 p.m. will feature two films, followed by a discussion led by Rick Guidotti. “Shooting Beauty” tells the story of fashion designer who discovers a hidden world of beauty at a center for people living with significant disabilities. It is followed by “On Beauty,” a film by Guidotti, who left the fashion world and its restrictive industrial standard of beauty to focus his lens on people too often relegated to the shadows. 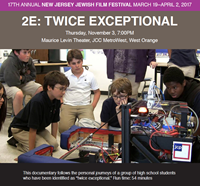 On Thursday, November 3, at 7 p.m., the festival will show “2E: Twice Exceptional,” a documentary that follows the personal journeys of a group of high school students who have been identified as “twice exceptional.” The post-screening discussion will be facilitated by Rebecca Wanatick (moderator), Sonya Selig (community building, awareness, organizing & lead for parent support groups), Alison Brown (Advocacy For Kids), and Beth Manes, Esq. 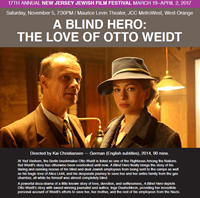 The final offering at this venue will be “A Blind Hero: Otto Weidt,” a docu-drama that tells the story of a blind factory owner who saved his employees from the Nazis. Among them was Award-winning journalist/author Inge Deutschkron, who provides an incredible personal account of Weidt’s shrewd efforts to save her and her mother. This film will be shown on Saturday, November 5, at 7:30 p.m. Elsa Zavoda (Program Director, Vision Loss Alliance of NJ) and another member of the VLA team) will lead the post-screening discussion.