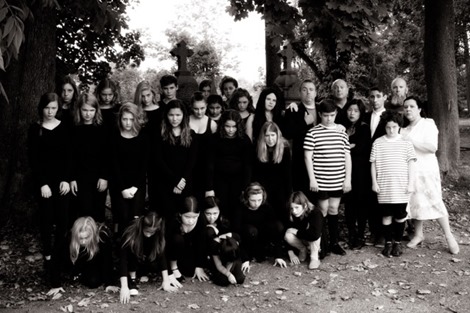 THE ADDAMS FAMILY, A NEW MUSICAL COMEDY
Written by Marshall Brickman and Rick Elice
music and lyrics by Andrew Lippa
directed and produced by Josh Reed

WHEN: Running from October 28, 29, 30, November 4, 5, 6, Fridays and Saturdays at 8 pm and Sundays at 2 pm.
WHERE: Sussex County Community College’s Performing Art Center, 1 College Hill Road, Newton
TICKETS: $15 for senior citizens and students age 17 and younger; $20 for adults. All tickets sold at the door are $25
Tickets can be preordered by visiting www.dramageekstudios.com or by calling 973-512-8251

The creepy, kooky and mysteriously spooky Addams Family will don the stage at Sussex County Community College in Drama Geek Studios’ production of The Addams Family, A New Musical Comedy.

Eruption occurs in the iconic Central Park household of the Addams Family when Wednesday Addams (played by Lizzy Raine of Sparta,NJ) announces she is in love with a “normal” boy Lucas Beineke (played by Alex McCully of Newton, NJ).

The patriarch of the family Gomez Addams (played by Josh Chiavaro of Dumont, NJ) and his hauntingly stunning wife Morticia (played by Meg Callan of Saddle Brook, NJ) host a dinner party for the love struck young couple and meet Lucas’s parents Mal and Alice Beineke (played by Josh Reed of Sparta, NJ and Jodi Halteman of Andover, NJ). Dilemmas ensue during the dinner as each guest reveal hidden personal truths during a hilarious night.

The cast of zany characters also includes the torture-driven son Pugsley (played by Zachary Halteman of Andover and Jocelyn Reynolds of Andover, NJ); the non-gender specific brother Uncle Fester (played by Bill Fell of Sparta, NJ), the grandma (played Allison Ognibene of Sparta, NJ), the grunting butler Lurch (played by Dan Reed of North Haledon). Finally, the undead ancestors round out the ensemble who live throughout Sussex County.