Eric Bogosian’s drama, Talk Radio, may be set in 1985 Middle America, but its content, observations and themes resonate today in a way that can be very unsettling. Written in 1987 and nominated for a Pulitzer Prize, his blackly comedic drama now onstage at the Chatham Playhouse features an “entertainer” so ubiquitous on the airwaves today that it’s hard to believe it hasn’t always been this way. 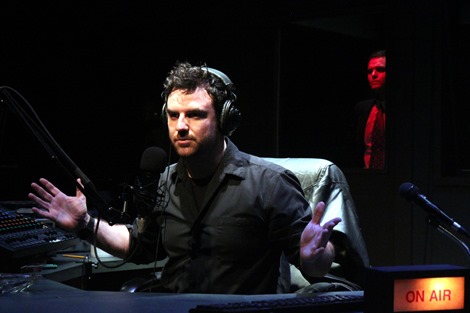 The play’s protagonist, Barry Champlain, embodies all the provocative qualities we have come to associate with a nighttime radio call-in show host who specialize in subversive radio. On the particular night in question, Champlain “auditions” for MetroScan, a company that wants to “take his show national.” Will he strike just the right balance of controversial inflammatory views, bullying of his callers and listeners, and his penchant for “telling it like it is”—without being too offensive—to impress MetroScan and move his show out of Cleveland, Ohio, onto a national stage?

Over the course of 90 minutes, Champlain shows just how malicious and diabolical he can be. He summarily cuts off boring callers mid-sentence at the push of a button and touts himself a god-like savior for a country that is, in his own words, “rotten” and “decadent.” He even goes so far as to push one caller too far; when a young man hysterically cries that his girlfriend has overdosed on drugs and is dead, Champlain calls him a liar and, at the urging of outraged callers, invites him down to the station. The weirdo who turns up hijacks the show and quite possibly puts the kibosh on Champlain’s prospects to become a national figure.

Michael J. Hegarty’s taut direction keeps the tension high as Champlain reveals himself to be as screwed up as his callers. Dominick J. DeNucci (top, with Dale Munro, Jr.) is riveting as Champlain, stringing along a caller who has dinner with his cat, a rabid anti-Semitic Holocaust denier and a pregnant teenager with rude jibes at their situations, often making up personal stories relevant to the topic, such as a trip to Dachau where he found a Star of David in the dirt. While broadcasting, he drinks whisky and smokes incessantly; during commercials he deals with his producer Linda, whom he beds from time to time; his call screener and long-time friend Stu; and Dan, his producer. 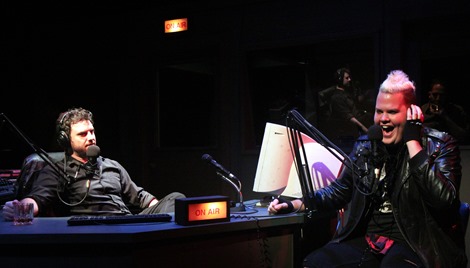 Each of these three—played by Christine Talarico, Joey Caramanno and Dale Monroe, Jr., respectively—step out of the action into the spotlight to deliver a monologue revealing another aspect of Barry’s personality and career. The trio is natural and convincing in their delivery, in contrast to DeNucci’s appropriately bombastic recitation of Champlain’s lines. My only quibble is Monroe’s initial appearance and interaction with Barry when he brings news of MetroScan’s interest in the show. He sounds too goofy and hyped up, quite unlike his more masterful sober retelling of how he “discovered” a “suit salesman with a big mouth” and created this shock jock. As the caller who reported his girlfriend dead, Christopher Frazier (above, right) is appropriately wacky, complete with punk hairdo, multiple piercings, studded leather and a hyena laugh. His arrival turns the program upside down; Champlain has gotten what he’s been asking for: a real-live misfit who has come through the telephone to confront his heckler.

Fine support is supplied by Chip Prestera as Sidney Greenberg, host of the tax advice show preceding “Night Talk with Barry Champlain.” His smarmy delivery of the ins and outs of investment, delivered very fast, is reminiscent of Jim Cramer et al. And Ginger Kipps’ portrayal of Dr. Susan Fleming, personal adviser, is equally as condescending and reminiscent of Dr. Laura et al.

The only odd notewas the strange accents of the show’s callers. Few of them sounded like real people, which is probably the point, for these are merely voices coming over a telephone line and as such aren’t real people. Perhaps the overacting is precisely the point; these strange individuals have nothing to do but talk to a radio host about their fetishes, giving Barry Champlain foils for his nasty, rude behavior. Indeed, by the time he delivers his final rant, “What do you have if you don’t have me,” we understand that without them he is nothing.

Robert Lukasik has designed a claustrophobic radio studio, with a horseshoe-shaped desk and glass cubicles at the rear. Richard Hennessy’s gloomy lighting is entirely appropriate to the dark manipulation going out across the airwaves. Joe DeVico’s superior sound design perfectly captures the workings of a radio studio.

The nastiness of radio hosts has been especially obnoxious during this election season, giving Talk Radio a relevance even Eric Bogosian couldn’t have anticipated when he wrote it almost 30 years ago. Barry Champlain is the father of shock jocks, and he reveals just how calculating they can be when interacting with callers. It’s chilling.

Talk Radio will be performed by the Chatham Community Players at the Chatham Playhouse, 23 N. Passaic Ave., Chatham, through October 15. For information and tickets, call the box office at 973.635.7363 or visit online at www.chathamplayers.org.