CHRISTINE LAVIN TO APPEAR @ THE MINSTREL IN MORRISTOWN 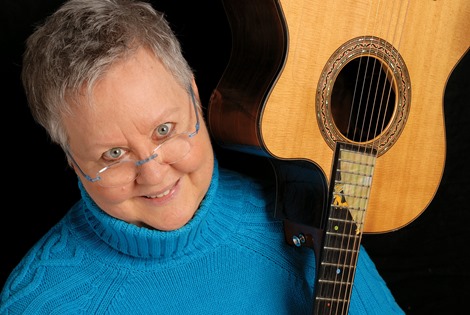 The Queen of the Intelligently Absurd: Christine Lavin

David and Sophie Buskin will open.  A part of the New York music scene since the 80s, Christine Lavin has recorded 22 albums, authored several books, and performs all across the U.S. and Canada as well as Australia, Germany and Israel.  She hosts knitting circles backstage before each show.

The event is part of The Minstrel Acoustic Concert Series, sponsored by The Folk Project each Friday evening at the Fellowship.

A performer who hosts knitting circles before her concerts and recently began tutorials during intermissions on how to fold cloth napkins in the Downton Abbey style?  Christine's concerts  are a romp through her own personal Wonderland –  a Wonderland shaped in the grit of New York.  One of her songs, “Cold Pizza for Breakfast,” expanded into a book, Cold Pizza for Breakfast, a Mem-Wha?  that won the 43rd Annual ASCAP Deems Taylor award for non-fiction writing about pop music.  She also has five ASCAP composer awards, the Backstage Bistro Award for best NYC Singer/Songwriter, and the album Good Thing He Can't Read My Mind won album of the year from the National Association of Independent Record Distributors.  Neil deGrasse Tyson's book The Pluto Files:  The Rise and Fall of America's Favorite Planet includes the complete lyrics of Christine's song “Planet X,” detailing Pluto's history in rhyme.