This is how theater should connect to people."— Margo Jefferson, Pulitzer Prize winning critic

“…drama, comedy, honesty and more… allows the audience to feel, rather than watch!” — nytheatre.com 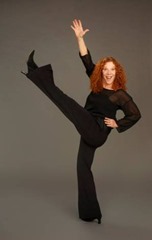 WHEN: October 27 through 30; Thursday, October 27 at 7:30 pm; Friday, October 28 at 8 pm; Saturday, October 29 at 8 pm and Sunday, October 30 at 2 pm.
WHERE: Edith Kutz Theater of the Lackland Center, 715 Grand Ave., Hackettstown
TICKETS: $15.00 to $25.00.  Thursday evening performances are $25.00 all seats with a buy one/get one rush ticket special when tickets are purchased in person at the CSC box office as early as two hours prior to performance.  Friday evening CSC is offering a special “alumni discount” of $10.00 off adult ticket purchases for alumni of Centenary University.
Special offers and discounts cannot be combined.
All ticket sales are final

“It's not how high - it's how strong”.  On her way to her first big New York audition, dancer Bernie O’Connell is tricked into a car and attacked in a vacant lot off the Brooklyn Queens Expressway.  Kick follows Bernie from a kick-line to “A Chorus Line” to Hollywood and back as she picks up the pieces and finds the glue to put herself back together.  Hailed as “riveting and truly worth seeing” by Kathryn Kitt of centerontheaisle.com, Kick weaves a tale packed with wisdom and humor.

Rush’s credits run the gamut of Broadway and Off – Broadway to television and film.  Kick is directed by Tony nominated Lynne Taylor – Corbett.  CSC audiences will remember Taylor – Corbett from her work on the 2014 world premiere of Joni Fritz’s In the Car with Blossom and Len and last season’s NJ premiere of Gina Gionfriddo’s Pulitzer Prize finalist Becky Shaw at Centenary Stage Company.  Taylor – Corbett was nominated for two Tony Awards for direction and choreography of Broadway’s Swing! in addition to a Drama Desk Award.

For more information or to purchase tickets visit centenarystageco.org or call the CSC box office at (908) 979 – 0900.  The box office is located in the Lackland Center; 715 Grand Ave. Hackettstown, NJ.  Box office is open Monday through Friday from 1 – 5 pm and two hours prior to every performance.  Centenary Stage Company can also be found across social media platforms; Facebook, Twitter and Instagram.  Follow and connect with Centenary Stage Company to receive the latest news and updates.