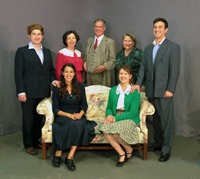 WHEN: Saturday, October 22, ending on Saturday, November 12. Curtain goes up for Friday and Saturday performances at 8 pm, with Sunday matinees at 2 pm.
WHERE: Little Firehouse Theatre, 298 Kinderkamack Road in Oradell.
TICKETS: $21 for Friday and Saturday performances and $17 for Sunday matinees and can be purchased online at www.bcplayers.org, by calling 201-261-4200 or by visiting the box office at 298 Kinderkamack Road in Oradell during regular box office hours. Visa, Master Card and American Express are accepted.

Religious tolerance gets an intra-ethnic twist in the Bergen County Players production of The Last Night of Ballyhoo.

The Los Angeles Times called the play “achingly beautiful…luminous and powerful. Uhry draws his characters with so fine a pen, on such a solid foundation, that the story takes on the sharp poignancy of life.”

The play is set in Atlanta, Georgia in December 1939, on the eve of World War II. Its main characters are drawn from a largely upper middle class German-Jewish community.

“I’ve wanted to direct this play for a long time,” says Fisher, who has helmed a number of other BCP productions, most recently "A Shayna Maidel". “As a Jewish person raised in Oklahoma, I understand firsthand what it’s like to be the minority and have to try so hard to fit in. I understand why the characters in the play struggle to blend in to the greater society, and their need to make compromises.”

Adolph Freitag, (Mic McCormack of Tenafly) is the owner of the Dixie Bedding Company. He and his sister Boo (Sharon Podsada of Emerson) and sister-in-law Reba (Janica Carpenter of Old Tappan) along with nieces Lala (Emily Bosco of Closter) and Sunny (Emma Ruck of Tappan, NY) are highly assimilated. In fact, the action begins with one of the nieces singing “The First Noel,” as she decorates a Christmas tree in the home’s front parlor. Everyone in the family, along with Peachy (Darren Carfano of Suffern), known for his outspokenness, is looking forward to Ballyhoo, a lavish cotillion ball sponsored by their restrictive country club. Enter Joe Farkas (Allen Pines of Fair Lawn), an attractive Jewish bachelor who Adolph has just hired. Joe is from New York, and although he has experienced some prejudice, he is unable to fathom its existence within his own religious community and can’t understand why some members of the Freitag clan treat him differently because of his Eastern European roots. The play is lighthearted and funny, but it has its serious moments. As it unfolds, the attitudes of some characters shift underscoring “The Last Night of Ballyhoo” themes of acceptance and change.