Columbine. Aurora. Virginia Tech. Sandy Hook. Every time we learn the dreadful details of another mass shooting, we mourn the victims. But how many of us mourn the parents? How do these fathers and mothers feel? Should they be blamed? Should they be pitied? Or should they be comforted? 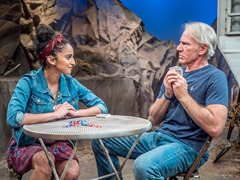 This is the crux of Vincent Delaney's timely drama, Las Cruces, now being performed by Premiere Stages at Kean University in Union. The winner of the 2016 Premiere Stages Play Festival, this enigmatic story set in the New Mexico desert, not far from the casinos and the spaceport, follows Sheridan, a man from Connecticut who has fled the East Coast under mysterious circumstances, and Soledad, the wise-cracking teenage card shark he befriends. Why has Sheridan come to this God-forsaken spot so far from home? How does his relationship with Soledad figure into his destiny? (Above: Diomargy Nuñez as Soledad and Brian Sutherland as Sheridan. Photo by Mike Peters)

Directed by Artistic Director John Wooten, Delaney's tale of buried secrets, improbable friendship and unexpected redemption springs to life through a series of flashbacks, the appearance of his estranged wife Jane and a solid dose of humanity. Aiding and abetting him is the talented cast he has assembled to do the heavy lifting.

Flashbacks and videos projected on the side of a broken-down trailer (part of Patrick Rizzotti's terrific set design) reveal that Sheridan's son Robbie has committed the horrific murder of 15 classmates at his high school. Adorably blonde as a tottering toddler, Robbie morphs into a crazed-eyed teenager in love with guns, even going so far as to caress and kiss a rifle he holds up to his cheek. His parents are totally unaware of the arsenal hidden under their son's bed; in fact, in his final video, he assures them that his deed is not their fault. What makes these videos so chilling is their eerie resemblance to those made by teenage jihadists employed by ISIS to do their dirty work. 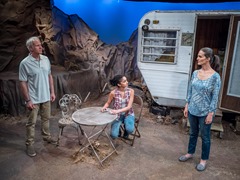 As the enigmatic Sheridan, Brian Sutherland wears an air of mystery about him from the moment he appears onstage. What is this middle-aged Easterner doing in a God forsaken landscape. Little by little, Sutherland poignantly reveals the man's secret past, a past so horrific that he is unable to even talk about it. Even the flashbacks featuring Charlotte Cohn don't divulge much because mostly, they have to do with her relationship with Robbie as a child. It is not until she makes an unexpected visit to Sheridan's trailer that we learn about the horrific crime and the aftermath her husband has left her to face. No wonder she's so angry with him. Cohn's controlled fury is devastating but not surprising; even its coldness cuts like a knife. The emotional vortex of the play is provided by a luminous Diomargy Nuñez as the 16-year-old Soledad, as proficient at cards as she is at hiding her own homelessness. Nuñez wears her flippant bravado like a suit of armor, but she lets the character's vulnerability escape little by little. She never plays on our pathos (nor does she go for bathos); her portrayal of Soledad is convincing and charming. (Above: Brian Sutherland as Sheridan, Diomargy Nuñez as Soledad, and Charlotte Cohn as Jane. Photo by Mike Peters)

Playwright Delaney's use of flashbacks felt a bit confusing at first, but as the details emerge, we look back on the home movies and Jane's surprise arrival at Robbie's birthday party more sympathetically and with greater understanding as to their import in subsequent events. Although the denouement is uncertain (no "and they all lived happily ever after" here), it is entirely natural. Sheridan and Jane have no child; Soledad has no parents. Perhaps they will get together; perhaps not. But the revelations lead to greater understanding, compassion and, yes, even a form of forgiveness.

Fine production values include, in addition to Patrick Rizzotti, Brant Thomas Murray's atmospheric lighting;, Janie Bullard's sound appropriate to the desolate New Mexico desert and surprising, as well; and Karen Lee Hart, whose costumes telegraph so much about each character.

Voting rightS and voter registration. Repairing (or not repairing) the devastation from Hurricane Sandy. The plight of political refugees. And in Las Cruces, the unseen victims of mass violence and the effect of homelessness on children. In their 12 seasons, Premiere Stages has brought to the stage topical plays relevant to the world around us. Some work better than others, but, hey, that's the nature of theater. Above all, John Wooten and his talented actors and playwrights have made us think. Las Cruces shines a light on the "other" murder victims—the ones who are alive. It's a situation most of us would not want to experience for more than 90 minutes—the length of Vincent Delaney's thoughtful, at times darkly comedic, play, Las Cruces.

Las Cruces will be performed at the Zella Fry Theatre on the campus of Kean University, 1000 Morris Avenue, Union, through September 18. For information and tickets, call the box office at 908-737 SHOW (7469) or visit online at www.kean.edu/premierestages.