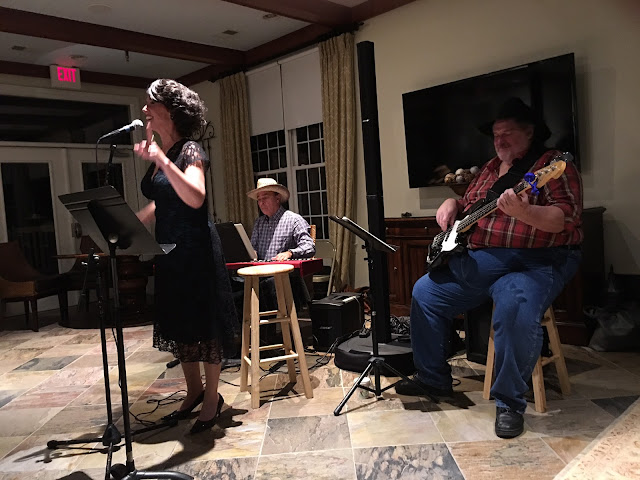 ​Last year, in our selections for the 2015 Footlights Awards we wrote this about Patricia Durante: "The musical 'Always…Patsy Cline' starring Patricia Durante as Patsy with Barbara Babbitt as her fan and friend Louise Segar. These two ladies are a "dynamic duo." First, Patricia Durante, one of our most talented actresses, demonstrates her fine vocal ability in singing 27 songs, including Patsy's biggest hits “Crazy,” “I Fall to Pieces,” “Sweet Dreams” and “Walking After Midnight.”

For the better part of 90 minutes she IS Patsy Cline....the costumes, the brunette wig, the movements and, of course the voice. This is the same Patricia Durante that four years ago on this very same stage starred in "Enchanted April." In our review, we wrote "Ms. Durante, who bears a striking resemblance to Deborah Kerr including the red hair, is in one word "enchanting." Well, she enchants us again in "Always...Patsy Cline." (RB)

Now jump forward to last night, Patricia with Tim Metz and Regan Ryzuk presented an equally terrific one hour salute to Patsy Cline at our Community Clubhouse in Chester Township. The audience showed their appreciation with a well-deserved standing ovation. 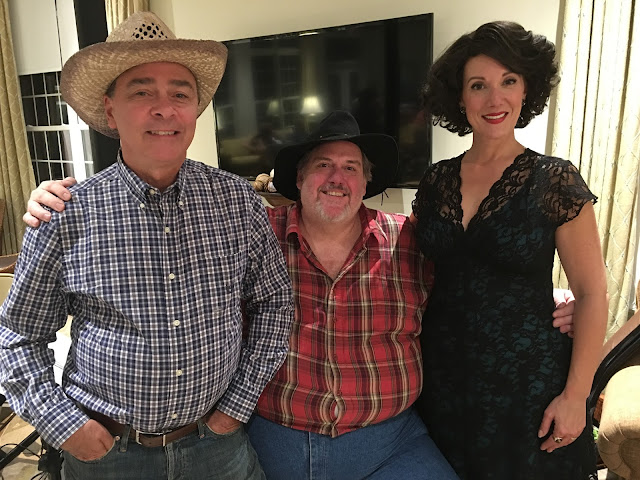 The 'Boys" are:
Tim Metz has long been a first call bassist in the New York metro area. He is fluent on upright bass, electric bass and tuba and in any style. He has been featured at dozens of major jazz festivals from coast to coast and has been fortunate enough to play with some great musicians including; Bob Crosby’s Bobcats, Bobby McFerrin, Aaron Neville, Maxine Sullivan, Tony Orlando, Dick Hyman, Bucky Pizzarelli, Sarah Partridge, Grover Kemble and many others. He has appeared at two Presidential Inaugural Balls in Washington D.C., played Carnegie Hall with Connie Francis and was the original bassist for the ‘American Musical Theatre Ensemble’ at Manhattan School of Music

Regan Ryzuk is a composer, orchestrator, arranger and pianist – with formal training at Manhattan School of Music and Juilliard. He has composed music for more than 500 television programs and films with such credits as Kissing Jessica Stein, Chasing Papi, The Night Listener, 60 Minutes and American Idol. He has recorded for The Wu Tang Clan, Russell Simmons and Quincy Jones, to name a few.

Patricia Durante and "her boys" would be a marvelous crowd-pleaser at your next club or community center event.