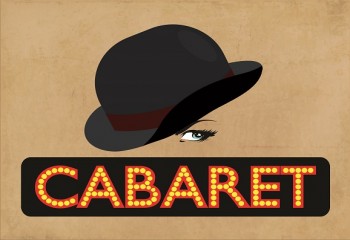 WHEN: September 10th through October 8th, 2016. Shows will be on Fridays and Saturdays at 8pm and Sundays at 2pm.
WHERE: Little Firehouse Theatre, 298 Kinderkamack Road in Oradell
TICKETS: $24 for all performances and can be purchased online at www.bcplayers.org, by calling 201-261-4200 or by visiting the box office at 298 Kinderkamack Road in Oradell during regular box office hours.
Those interested in Group Sales or benefit theater parties can call (201) 261-4200 (mailbox #6).
Discount tickets for students age 25 and under with proper ID are available for $14 by phone or walk-up only, not online.

Bergen County Players, the New Jersey Association of Community Theater’s “2015 Community Theater of the Year,” is proud to open its 84th season with the Tony Award winning musical, Cabaret, a cautionary tale about a society in trouble and their escape from reality.

Set in 1931 Berlin, Cabaret primarily takes place amid the nightlife of the seedy Kit Kat Klub. Life there revolves around the 19-year-old English cabaret performer, Sally Bowles and her relationship with the young American writer, Cliff Bradshaw. Overseeing the action is the mysterious Master of Ceremonies at the Kit Kat Klub, which serves as a metaphor for ominous political developments in Germany as the Nazis rise to power. Director Alan Demovsky encourages the audience to ask

questions: “Why have so many versions of this story been told for almost 100 years? Is it truly a cautionary tale? Can this happen again? Is it perpetually happening?”

Demovsky, of New City, NY has an interesting background and is the “go to” person for Robert Osborne of Turner Classic Movies in his lecture series as Film Historian at venues across the United States. He also directs readings for the Emmy Awards New York chapter ongoing program to encourage new playwrights. He has directed 20 productions including A View from the Bridge, Who’s Afraid of Virginia Woolf?, Ballroom, The Laramie Project, Twelfth Night, Grey Gardens, and the original opera The Dybuk. He has also appeared on stage in numerous plays and musicals including Six Degrees of Separation, Crossing Delancey, Oliver!, and Frankie and Johnnie in the Clair de Lune, to name a few. In his spare time, Alan volunteers weekly at The Lillian Booth Actors Home in Englewood.

As it has for the past few seasons, BCP will continue to offer a “Questions & Artists” (Q&A) discussion following select performances. Cabaret Q&A will kick off immediately following the September 16, 2016 performance. Admission is included in the cost of the ticket.

A new program is now available for qualified non-profit organizations to use one performance of each production as a fundraising event. The group will book the house at a deeply discounted price and then resell the tickets at a price of their choosing, with the difference in price kept by the group. The available date is the Thursday of each show’s final weekend.

Parking is free for our patrons at the Park Avenue municipal lot, across the street, one-half block north of the theater, as well as street parking on Kinderkamack Road and various side streets, all within easy walking distance.