Reviewed by Michael T. Mooney at New Jersey Repertory Company on August 27th at 8:00pm
Thanks to Rick Busciglio, www.njfootlights.net

“I used to know human beings. Then I got involved in the theatre.” ~ James McLure's IAGO

Instead of Othello and Desdemona IAGO, opens with a dramatic exchange between Lord Horatio Nelson and Lady Emma Hamilton, a scene vaguely (if not directly) taken from the 1941 film THAT HAMILTON WOMAN. Here, however, the couple are standing in front of a red velvet stage curtain bathed in footlights—bowing to thunderous applause from an adoring (unseen) audience. This brief prologue sets the tone for what's to come: part historical romance, part love letter to the theater. That historical romance, however, isn't between Lord Nelson and Lady Hamilton. 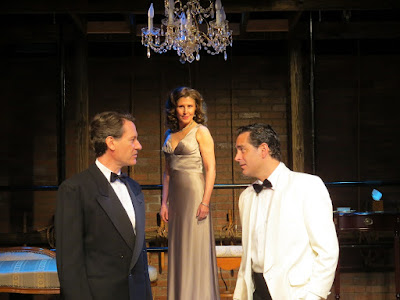 Backstage, after the couple's performance, we also meet up-and-coming young Australian actor Peter Finney (Todd Gearhart) as well as a well-known English director named Sir Basil Drill (John FitzGibbon). Those au fait with the world of the paint and the motley—and perhaps possessing some serious cinematic savvy—will soon realize that playwright James McLure is actually writing about real-life celebrity couple Laurence Olivier and Vivien Leigh, here coyly dubbed Anthony Roland (Ezra Barnes) and Vivacity Wilkes (Liza Vann). The Peter in the room is none other than a young Peter Finch, with whom Leigh famously conducted a torrid extra-marital affair. Marshaled by Drill (who is modeled on self-described genius Noel Coward), the three rehearse a production of OTHELLO, a fact that—like their names—McLure likely invented to parallel the actors' real-life romantic triangle. (Above, L-R: Ezra Barnes, Liza Vann, Todd Gearhart)

This was McLure's final play before his untimely death in 2011. It is rare for NJ Rep—which exclusively produces premieres—to be without a living author in the wings. Experienced director SuzAnne Barabas deftly fulfills McClure's intentions, smartly mixing the abundant theatrical ambiance with quick pacing and spare (but effective) design elements to also reflect the characters' better known movie careers. The talented cast rightfully uses McClure's script as their prime resource, and while suggesting their famous inspirations, they wisely do not attempt to imitate them. Set designer Charles Corcoran beautifully balances the script's multiple locations without taxing the play's tricky theatrical metaphor. As usual, Jill Nagle's lighting is exquisitely evocative, and Patricia E. Doherty's wardrobe nicely conveys the 1950s, as does the more flamboyant costumes for the play's theatrical moments.

Those looking for a bio-pic style look at the subject would best look elsewhere. While the play is constructed using cinematically brief scenes, the details are often seen through a fuzzy lens. The short scene structure often gives short-shrift to traditional character development, but McClure more than makes up for it with a plethora of pithy dialogue. When Peter hopes that appearing in OTHELLO will launch his acting career, Sir Basil dryly replies that “No one ever became a star playing Iago.” IAGO is McClure's tribute to star-crossed lovers living and working in a star-struck theatreland.

IAGO is on stage at New Jersey Repertory Company at 179 Broadway, Long Branch, through September 25, 2016. For tickets and further information call 732.229.3166 or visit www.njrep.org