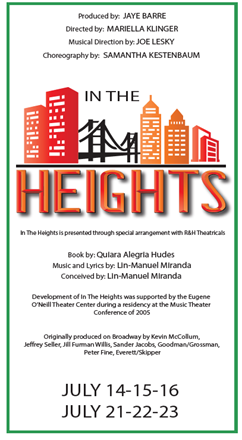 The musical tells the universal story of a vibrant community in New York’s Washington Heights neighborhood—a place where the coffee from the corner bodega is light and sweet, the windows are always open and the breeze carries the rhythm of three generations of music. It’s a community on the brink of change, full of hopes, dreams and pressures, where the biggest struggles can be deciding which traditions you take with you, and which ones you leave behind.

In the Heights was conceived by Lin-Manuel Miranda, with music and lyrics by  Lin Manuel Miranda and Quira Algeria Hudes. The show was the winner of the 2008 Tony Awards for Best Musical, Best Score, Best Choreography, and Best Orchestration. 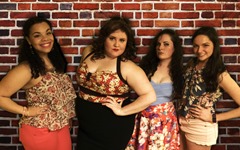 The partnership of Trilogy Repertory and Bernards Township has produced over three decades of family entertainment and achieved several awards for both groups for excellence in theater programming.  Most prominent are the awards from ACT (Achievement in Community Theater) and the prestigious “Excellence in Cultural Arts Programming.”  In The Heights is made possible, in part, by support from New Jersey State Council on the Arts, and is presented through special arrangement with R & H Theatricals. (Above right: Gabriella Resende (Carla) of Clark, Jessica Zorn (Daniela) and Gillian Petersen (Vanessa) of Basking Ridge, and Jessica Pierce (Nina) of Clifton rehearse their roles)