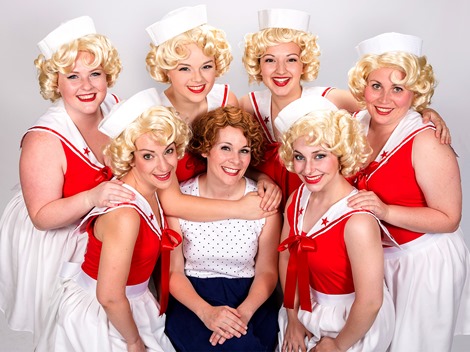 WHEN: Fridays, July 29 and Aug. 5 at 8 p.m.; Saturdays, July 30 and Aug. 6 at 8 p.m.; and Sundays, July 31 and Aug. 7 at 2 p.m.  A reception with the cast and crew follows the opening night performance on July 29.
WHERE: Mercer County Community College’s (MCCC’s) Kelsey Theatre located on the college’s West Windsor Campus, 1200 Old Trenton Road.
TICKETS: $20 for adults, $18 for senior citizens, and $16 for students and children.
Free parking is available next to the theater.
Tickets may be purchased online at www.kelseytheatre.net or by calling the Kelsey Box Office at 609-570-3333.
Kelsey Theatre is wheelchair accessible, with free parking available next to the theater.

Hop on board the S.S. American and get ready for music and romance on the high seas as M&M Stage Productions presents “Anything Goes.” (Top: Surrounded by angels: Jennifer Fischer, center, as Reno Sweeney, with, clockwise from left, Ashley DeAntonio, Tara Wagner, Amanda Peterson, Alison Coombs, Lauren Donahue and Sarah Webster.) 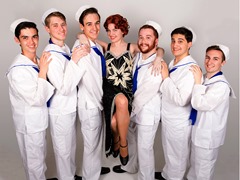 “Anything Goes” is a classic boy-meets-girl story – with lots of hilarious complications thrown into the mix before all the romances get sorted out and disaster is averted!  The show stars nightclub singer Reno Sweeney, who is traveling by luxury liner from New York to England. Her pal, Billy Crocker, has stowed away to be near his love, Hope Harcourt, but Hope is engaged to the wealthy Lord Evelyn Oakleigh. Joining this on-board love triangle are Public Enemy Moonface Martin and his sidekick-in-crime Erma. With the help of some elaborate disguises, tap-dancing sailors, and good old-fashioned blackmail, Reno and Martin join forces to help Billy in his quest to win Hope’s heart. And it's all set to a magical musical score by the legendary Cole Porter. [Above: Sailors and the showgirl! Featured, from left, are Jon Logan, Michael Chell, Michael Marrero, Erin Wurtz (as Erma Latour), Nick Kianka, Connor McDowell and Matt Keelan.]

The ship’s “angels” include Alison Coombs of Lambertville, Ashley DeAntonio of Hamilton, Lauren Donahoe of Bensalem, Amanda Peterson of Lawrenceville, Tara Wagner of Hamilton, and Sarah Webster of Edison.