REVIEW: “JERSEY VOICES 2016” PERFECT FOR A SUMMER EVE OF THEATER

One of the joys of summer is Chatham Players' Jersey Voices, the festival of one-act plays performed by the venerable troupe for the past 22 seasons. I think I have seen all but three in my 20 years of reviewing! Some years, the offerings are uneven in writing and/or performance, but this year the company has put together a winner!

Of the seven playlets, three are dramas while the remaining four are comedies. All the entries are helmed by different directors and acted by seasoned veterans and newbies to the troupe.

It was difficult for me to select my favorites, for all the plays had something to recommend them. Of the dramas, Paper Bell was the most affecting. About to make a recording on a "diamond disk," famous singer Ruth McKintire (Lauri Macmillan) passes some time with self-described "farm boy" Charles Green (Charlie Thomson). She longs for the family life in a small town he enjoys; he seeks the adventure and travel she experiences on the road. While nothing is resolved at the play's close, the moments these two spend together certainly are bittersweet. Jessica Phelan competently directs, but she needs to get Thomson to speak louder. He was often difficult to hear even in the little black box Chatham Playhouse.

One, Three, Two by Michael Weems and directed by Lynn Polan, addresses the stranglehold technology (and its accompanying passwords and codes) has on modern life, strangling our need for simplicity. Daniel De Guzman is affecting as Jake, who has "gone fishing" instead of picking his son up at school, much to the consternation of his very capable wife Heather (Sarah Blannett Pharaon). The play moseys along rather pokily, as befits a man escaping from the rat race, but the satisfactory ending finds the couple determining a possible solution to Jake's problem.

The third drama, Not Enough, written by Chip Bolcik and directed handily by Robert Lukasik, explores a marital dilemma faced by a middle-aged couple. Their predicament is presaged by Peggy Lee's rendition of "Is That All There Is" and by the play's title. That Bob and Mary (Lewis Decker and Bridget Burke Weiss—both terrific) break the fourth wall to address the audience adds a bit of levity to the fraught situation doesn't really diminish the play's emotional punch. He wants the two to be lovers again; she chastises him for not making her feel special—a situation probably faced by many long-time couples, making the topic relevant and timely.

As for the comedies, be warned that I will not divulge details that might affect your enjoyment of them. The festival opens with a bang, presenting What Every Grown Son Wants His Mother to Know by Joann Lopresti Scanlon and directed by Kevern Cameron. Janie (Paula Ehrenberg), Donna (Colleen Grundfest) and Laura (Amie Quivey) have gathered for lunch and to complain about the lack of maternal attention paid by their college sons. Enter Donna's son David (Zach Shinske) and we get a hilarious "take" on what goes on between mothers and sons from the latter's point of view. All the actors are superb, with Grundfest best expressing the plight of "helicopter moms" who can communicate with their college student offspring by text or computer. Although we are familiar with parental complaints of neglect, Scanlon gives us the opposite point of view to great comedic effect.

Happily Ever After, penned by Jeanne Johnston and directed by George Seylaz, stand the Cinderella happy ending on its ear, also to great comedic effect. Broadly played by Bradley Carrington (the Prince) and Katherine LeFevre (the Princess), the two fairy tale innocents charmingly display the dilemma posed by such a sunny ending. The play provoked much laughter as it really tackled what, in real life, is a serious problem. 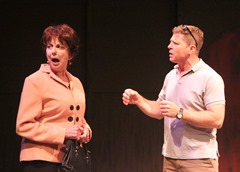 The last two plays, both comedies, were especially droll. Bottle for a Special Occasion (by William C. Kovacsik and directed by Arnold Buchiane) features the great comedic actress Terri Sturdevant as the grieving widow Judith shopping at the wine store for an appropriate bottle of wine to put in the coffin of her late oenophile husband. As the clerk Martin (Duane Noch) attempts to help her, the truth of her marriage is revealed; it's not pretty, but both the playwright and Sturdevant manage to wrest comedy from it—the latter through her masterful delivery of the dialogue! She is a delight to watch.

And Fantasy Dance (by Gary Shaffer and directed by Joann Lopresti Scanlon) involves a trio of Dance Dads at a competition in which their daughters and granddaughter are competing. This playlet ended the festival with a bang appropriate to the first entry; the two acted as perfect bookends to the entire festival! Frank Bläuer (Tim), Bob Grundfest (Bob), Roy Pancirov (Frank) and TJ Ryan (Jerry) apply the jargon of fantasy sports to dance and the result is side splitting. Pancirov is especially comical; Grundfest matches his performance as a man obsessed by palindromes. Using the sport fantasy metaphor in an offbeat way is hilarious.

Jersey Voices 2016 is a delight for lovers of original one-act plays, especially by New Jersey playwrights. Every year it's like what Artistic Director Bob Lukasik paraphrased from "Forrest Gump," a box of chocolates—you never know what you're going to get. This time, it's a box of whatever your favorites may be (mine are caramel). So open the cover and dive right in!

Jersey Voices 2016 will be performed at the Chatham Playhouse, 23 N. Passaic Ave., Chatham, through August 7. For information and tickets, call the box office at 973.635.7363 or visit www.chathamplayers.org online.