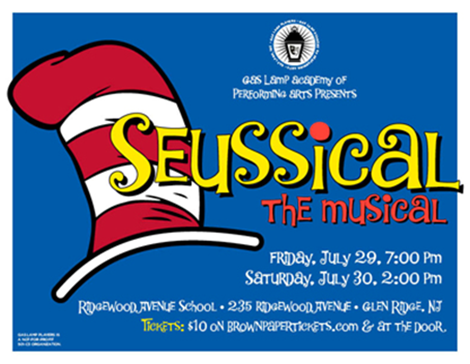 The Gas Lamp Junior Players bring the lyrical genius of Theodor Geisel, aka Dr. Seuss, to life in Seussical: The Musical, during two shows July 29 and 30. Directed by Kristy Graves and produced by Susan Knight Carlin, 76 young actors will portray characters from beloved Dr. Seuss favorites including The Cat in the Hat, Horton Hears a Who, Green Eggs and Ham, If I Ran the Circus and Oh, The Thinks You Can Think.

While the cast is comprised of girls and boys grades 1-8, the artistic team opted not for the abbreviated “junior” version of Seussical, but instead for the full length adaptation of the Broadway production that ran in 2000. The production is musically ambitious with three-part harmonies and big production numbers, but the young actors are up to the task, according to Kristy Graves, Gas Lamp Artistic Director. “The kids are willing to work hard and push their boundaries,” says Graves. “Their reward is an incredible shared experience and the accomplishment of performing a full length show complete with production-value costumes, props and sets.”

Auditions are not required for participation in Gas Lamp Junior camp. Some campers have extensive training and performance experience; others have never set foot on a stage. A professional teaching staff, aided by college and high school counselors, creates a wealth of learning opportunities. Carefully planned rehearsal schedules rotate the campers through acting, singing and movement training as well as related classes such as comic book creation to aid in character development and music mash-ups to improve musicality. The kids admire and encourage each other – and create a family dynamic over the four weeks of camp.

“Seussical has so many wonderful and wacky characters -- The Cat in The Hat, Horton the Elephant, Gertrude McFuzz, the citizens of Whoville and Jojo, a little boy with a big imagination,” observes Gas Lamp Business Manager Susan Knight Carlin. “Many are familiar from Dr. Seuss story books. Nonetheless, we encourage our campers to think about these characters’ motivations and feelings. What a unique opportunity for our young actors to embody living, breathing characters.”

Knight Carlin describes her favorite song in the Show. “Alone in the Universe is a sentiment that we all can relate to,” says Knight Carlin. “There’s a sweet moment when two very different characters connect with each other and find a true friend.” Graves concurs. “Seussical delivers messages that are beautiful, insightful, powerful and hilarious,” Graves concludes. “These stories ring especially true in light of all we’re experiencing as citizens of the world today.”

Gas Lamp Junior Camp is an educational four-week performing arts workshop that offers acting, singing and dancing classes along with rehearsals and performances of a full-length musical production. Gas Lamp Players is a non-profit community theatre whose mission is to cultivate creativity, confidence, compassion and community through the performing arts. For more information, visit http://gaslampplayers.org.