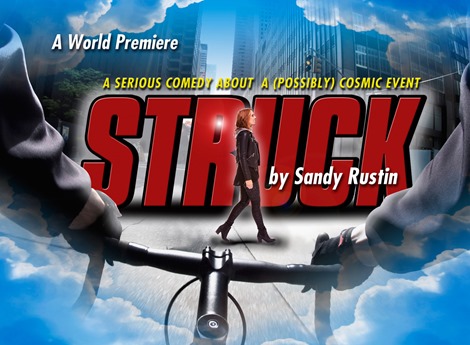 After being hit by a bicycle while crossing an East Village intersection, Vera Resnick's simple, predictable life is about to take an unexpected turn. Is it coincidence that brought Vera and the bicyclist together or are greater forces at play? STRUCK is a serious comedy about a possibly cosmic event that deals with the search for truth in the face of deception.

Sandy Rustin (Playwright) Sandy is an actress, playwright, and mom. She is thrilled to have her new play, Struck, make its world premiere at NJ Rep. Her sketch comedy musical about parenthood, Rated P (for parenthood), opened to critical acclaim Off-Broadway at the Westside Theatre in 2012 (“P is for Perfect!” Star Ledger) and is in development for television with ABC Studios and Kelly Ripa and Mark Consuelos. Her full length comedy, The Cottage, (a Reva Shiner Comedy Award Finalist) has been enjoying rave reviews regionally (“laugh-out-loud”- NY Times) and is currently under option for an upcoming commercial production in New York. Her newest play, HOUSTON, is in development. Sandy recently guest starred on Comedy Central’s, Inside Amy Schumer and regularly appears at New York’s The Upright Citizen’s Brigade in Gravid Water (named “Best ImprovShow” by Time Out NY). She is the Founding Co-Artistic Director of Midtown Direct Rep, an advocate the cowdenfoundation.org and makes a delicious gluten free/dairy free lasagna that her children will actually eat. Northwestern University graduate. Sandy is represented by Max Grossman at Abrams Artists and Matthew Lefferts at FWR&V www.sandyrustin.com.

Don Stephenson (Director) Don has directed Titanic at Lincoln Center, Of Mice and Men, Manhattan for the Millennium Stage at the Kennedy Center, The Other Place at the Alley Theatre, Vanya, Sonia, Masha, and Spike and Lend Me A Tenor at Paper Mill Playhouse, The Roar of the Greasepaint -The Smell of the Crowd and Guys and Dolls at Goodspeed Opera, Buyer and Cellar and Noises Off at Pittsburgh Public Theatre, Sister Act at the Marriott Theatre, The Cottage at Theatre Aspen, I’ll Eat You Last: A Chat With Sue Mengers at Theatreworks/Hartford, Lend Me A Tenor at Bay Street Theatre (Broadway World nom. Best director of a play), Titanic at The Muny Opera, The Hangar Theatre (Broadway world nom. best director of a musical),  and Westchester Broadway Theatre, Deathtrap, Noises Off, and The 39 Steps at the Flat Rock Playhouse, The Mystery of King Tut and Skippy Jon Jones for Theatreworks/USA and The Great Unknown for the New York Theatre Festival. He directed the critically acclaimed productions of Oleanna, Cat on a Hot Tin Roof, and the hit musical comedy Doctors and Diseases at the historic Barter Theatre. Other New York directing credits include: A Charles Dickens Christmas (Urban Stages), Buck Simple (Garrick Gaities), When Pigs Fly (Kaufman Theatre), Golden Voices (Symphony Space), Old Flames (Theatre Studio Inc.) and the workshop production of My Time of Day; The letters, lyrics and music of Frank Loesser. He has directed productions of The Desperate Hours and through all kinds of weather, both at the Clarence Brown Theatre and Sleeping Beauty at American Stage Festival. As an actor, Don played the D’Ysquith family in the Tony award-winning A Gentleman’s Guide to Love and Murder, and starred as Leo Bloom in the Tony award-winning Broadway production of The Producers. His other Broadway credits include: Rock of Ages, Private Lives, Dracula, Titanic, Parade, By Jeeves, The Bandwagon, Pardon My English and Wonderful Town. A native of Chattanooga, Tennessee, he holds a BA from the University of Tennessee. 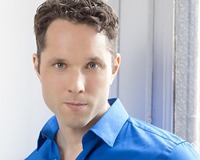 Adam Bradley (Nate) Born in Vancouver, B.C., Adam has worked and trained all over the world – Vancouver, Prague, Denmark, Serbia, Bali, Norway, and Toronto – but now calls New York home. Originally intending to be an academic, Adam earned his B.A. in Philosophy at the University of McGill and continued on to an M.A. at the University of British Columbia. While at UBC, his passion for photography led him onto film sets as a stills photographer. And, inspired by the brilliant documentary Visions of Light, he shifted his focus to cinematography and started working as a lighting technician. Over the next few years he worked on everything from no- budget student productions to major studio pictures, in lighting, camera, sound, and directing. While in Prague he found himself accidentally acting in a sketch comedy show; the experience was so overwhelmingly fun that he decided to move in front of the camera and become an actor. After training at the Atlantic Acting Conservatory in NYC, he started writing, mostly so that he'd have something to act in. And, not knowing any producers, he started producing his scripts himself – and directing them when he's afraid someone else's vision will ruin them. He continues to wear multiple hats on projects both theatrical and cinematic, but his first love has always been acting. His first feature film, which he wrote and executive produced, Bank$tas, was released theatrically in the U.S. in the fall of 2014 by Main Street Films. His second film, Yesterday Last Year, which he wrote, produced, and acts in, will be completed by early 2016. To date he has produced, written, and/or directed seventeen short films; his upcoming projects are all feature films: Zebra Victor One, Irreversible, Borrasca, and Negative Space, are currently in development. He and his wife Amelia Mathews created Well-Drawn Dog Productions as the home for their film projects, both short-form and feature-length.

Susan Maris (Vera) NYC: Henry V, King Lear, and The Edwin Booth Company Presents, This Prison Where I Live (Titan Theatre), The Merry Wives of Windsor, The House of Bernarda Alba, and The Book of the Dun Cow (Prospect Theatre Company).  Shows at The Wild Project and The West End Theatre.  Regional:  Happy and The Substance of Bliss with New Jersey Repertory Company, Love’s Labour’s Lost, Much Ado About Nothing, The Learned Ladies, Othello, The Servant of Two Masters, A Christmas Carol, and The Grapes of Wrath with The Shakespeare Theatre of New Jersey, Cymbeline at Theatreworks Colorado.  Film/TV: She Gave Me Water, Limitless, The Blood Painting, Discovery ID, College Humor. 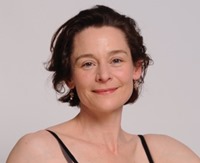 Jenny Bacon (Vicky) Jenny just finished the run of Misery on Broadway, standing by for the role of the infamous psychopath Annie Wilkes; previously she played Rivke in the Drama Desk winning My Name is Asher Lev at the Westside, and created the role of Lucy with Sam Shepard in Heartless at the Signature Theater. She has also recently premiered plays for Sarah Ruhl (She in Stage Kiss, Goodman Theatre), Lisa Kron (Amy in In The Wake, Public Theater), Theresa Rebeck (Lydia in Omnium Gatherum, Variety Arts). She began her New York career with the US premiere of Ivo van Hove’s work at NYTW, More Stately Mansions and Streetcar Named Desire, where she also performed the role of Mabel in Paul Rudnick’s Most Fabulous Story Ever Told. She has been working all over New York City, and regionally at such theaters as Steppenwolf, McCarter, Yale Rep, Long Wharf, Williamstown, Alley, Seattle Rep, and California Shakespeare, and has made appearances on all three Law & Order shows, playing a variety of unfortunate souls.

Ben Puvalowski (James) is thrilled to be playing the role of James in the world premiere of Struck and making his NJ Rep debut. A New Jersey local, Ben went to Ranney High School where he performed in all of his school plays since 2nd grade and won a Count Basie award his senior year for Best Actor. He is currently completing his junior year at NYU's performing arts program at Tisch. In addition, Ben is the lead singer for his band “Little Bear” (formerly “The Idjits”) and has performed in New Jersey at the Saint, Brighton Bar, The Stone Pony,  Wonderbar and other venues, as well as several in New York City including the iconic, Bitter End. Most recently Ben appeared in the NYU studio production of The Motherf*cker With The Hat, and was featured in Sissy Man, a short film directed by Joshua Atesh Litle, currently in post-production headed for the Toronto Film Festival. 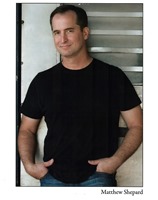 Matthew Shepard (Bertrand) Matthew has appeared on Broadway in Beauty and the Beast, The Scarlet Pimpernel and, playing opposite Donna Murphy, and later BrookeShields, in Wonderful Town. He has toured the United States and Canada in Les Miserables as Enjolras and The Scarlet Pimpernel as Farleigh, and has performed throughout Europe in the title role of Maury Yeston's Phantom. He starred as Dr. Peterson in the original Off Broadway production of Sessions by Alan Tapper. Matthew has multiple New York area and Regional credits, but a major highlight was when he appeared in the highly successful Sondheim Celebration at the Kennedy Center in Washington, DC, as The Soldier/Alex in Sunday In The Park With George, starring Raul Esparza  and Melissa Errico. He has also been seen numerous times on The Guiding Light on CBS and has soloed with many orchestras throughout the USA, Canada and Europe.