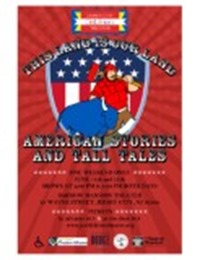 Jersey City’s premiere theater for family audiences, Jersey City Children’s Theater (JCCT), presents its latest adventure in to classic Story Theater, a romp through American folklore as it was meant to be seen—through larger-than-life myths and legends.

The show features five American folktales: “Paul Bunyan,” “Pecos Bill,” “Sally Ann Thunder Ann Whirlwind,” “The Nuts of Jonisgyont,” and “The Discontented Rock.” The stories are brought to life with minimal sets, lighting, and costumes, in favor of shadow puppetry and imaginative physical theater, with live accompaniment and folk songs for the whole family to sing along!

As is always the case with JCCT productions, a post-performance interactive story theater workshop will be offered where young audience members are invited to act out and re-imagine parts of the show with the cast. JCCT is committed to providing high quality professional theater to the community, as well as theater instruction for all ages, in a fun, creative and educationally enriching environment. JCCT is an emerging member of the New Jersey Theater Alliance, a parent organization of New Jersey’s professional theaters.

In an election year, the artistic team at JCCT wanted to take the opportunity to focus on what’s great about the rich folk art traditions at the heart of our nation. By spinning yarns from coast to coast and crafting tales taller than a giant blue ox, This Land is Your Land reminds us that between the stories of the pioneers and the native American Indians, America’s roots are scrappiness, ingenuity, and hard work. With these stories at heart, it’s easy to remember that America never stopped being great.

Jersey City Children’s Theater is a production and educational theater company using the seminal works of Neva Boyd, Viola Spolin and Paul Sills as its foundation. Boyd, Spolin and Sills believed in the power of focused play and theater games as perfect portals to direct experience, both onstage and in life. JCCT presents Story Theater (a narrative theatrical form, developed by Sills in the 1960s) performances and workshops to diverse youth audiences locally and nationally. The award winning Actor/Educators with Jersey City Children's Theater have all worked directly with Sills, Spolin and/or Carol Sills (Paul Sills’ wife, who does annual workshops directly with JCCT), are industry professionals working both on and off-Broadway, in film and television, and have over 100 years combined conservatory teaching experience. In addition to presenting original adapted work of classic fairy tales, fables and folklore, JCCT has worked with teaching artists and performers from Colombia, India, Norway, Turkey, Sweden, Brazil, Canada, and Mexico. Jersey City Children's Theater currently partners with dozens of New Jersey and New York schools and organizations developing community-specific enrichment programs both during and after school.

Since opening its doors in March of 2011, JCCT has served over 13,000 students and audience members, bringing the highest quality of theater performance and education to the community. A 501c3 not-for-profit, the company receives funding from multiple foundations, business partners and government agencies including The Geraldine Dodge Foundation, The Daedalus Foundation, SILVERMAN, The City of Jersey City, Bank of America, Hudson County Office of Heritage and Cultural Affairs, as well as from a large number of faithful donors.  Jersey City Children's Theater hosts its home main-stage season at Jersey City's Historic Barrow Mansion, presents a touring company: Plays in the Parks in cooperation with the Jersey City Parks Coalition, holds panels on education and arts, and offers numerous theater classes to both youth and adults.