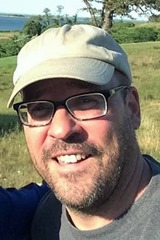 Playwright Michael John McGoldrick comes home from grad school for the summer; Theater Project presents a staged reading and discussion with the author of his new play, WORLD’S END.

When Michael John McGoldrick joined The Theater Project’s playwrights workshop in 2012, he was working as a high school English teacher; three years later he was accepted to the graduate theater program at Arizona State University.  Home in New Jersey this summer, he will discuss his transition and his newest play when The Theater Project stages WORLD’S END as a script in hand performance at the Burgdorff Cultural Center, 10 Durand Road, Maplewood, NJ.

McGoldrick’s WORLD’S END is based on actual events, in which spiritual longing and philosophy collide with sex and murder. Two German idealists move to the Galapagos Islands in search of paradise, only to find Eden invaded by an enemy without and an enemy within.

Michael John McGoldrick is the author of nine full-length plays and several shorter works. His play CHILDREN OF PHILADELPHIA was named a finalist in the 2015 Maxim Mazumdar New Play Competition sponsored by the Alleyway Theater. BY THE SHORES OF ALLUVTOOMEY was named a finalist in Playhouse on the Square’s NewWorks@TheWorks 2nd Annual Playwriting Competition. His short play THE CHINESE LIFE FORCE was a semifinalist in Little Fish Theater’s 2015 Pick of the Vine 10-minute Play Competition. His other plays have received staged readings from The Theater Project, New Jersey Repertory Company, The Monarch Theater, Sundog Theater and StrangeDog Theater. He is currently pursuing a Master of Fine Arts in Dramatic Writing at Arizona State University.

The Theater Project believes that a more thoughtful, inspired and creative community can be stimulated by its unique brand of professional, high-quality and theatrical programming. It is dedicated to the presentation of powerful and relevant productions that explore long-standing values and contemporary topical issues in an intimate and engaging setting. More information is available at www.TheTheaterProject.org. or by calling (908) 809-8865.