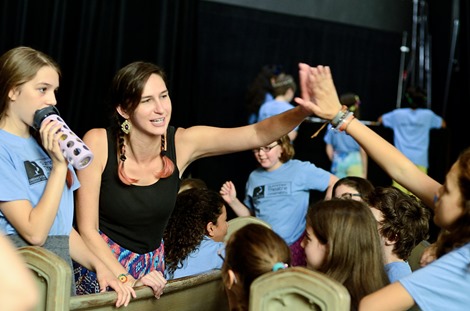 WHEN: July 11 through July 29, 2016; Monday through Friday from 9:00 a.m. to 3:00 pm (with a special performance July 29 at 7:00 pm)
WHERE: Dreamcatcher’s home at the Oakes Center, 120 Morris Avenue in Summit.
TUITION: $750 for all three weeks, with limited scholarships available.  Admission is on a first come, first served basis until the program is filled or until the deadline of June 30, and applications for the Summer Theatre Program: Dreamcatcher Junior and more information on the program may be obtained by calling Dreamcatcher’s business office at 908-514-9654, emailing info@dreamcatcherrep.org or may be downloaded at www.dreamcatcherrep.org.

Dreamcatcher Repertory Theatre, professional Theatre in Residence at the Oakes Center in Summit, will hold its Summer Theatre Program: Dreamcatcher Junior for students aged 10 to 17.  Dreamcatcher’s Summer Theatre Conservatory is a three-week theatre experience. Guided by professional actor and director Jessica O’Hara-Baker, students build skills and study with theatre artists in a variety of subjects while creating and performing their own play.

Jessica O’Hara-Baker (above, center) has directed the Dreamcatcher Jr. program for the past six years, helping students to find their creative voice while working in a collaborative environment. O’Hara-Baker recently appeared on the Dreamcatcher stage as Lilly in John Kolvenbach’s Sister Play and Avery in Gina Gionfriddo's Rapture Blister Burn. Other Dreamcatcher credits include Rx, The Other Place, Shakespeare in Vegas, The Neighborhood, Blood: A Comedy, and Next Fall. Jessica is based in New York, where she performs, directs and produces with an emphasis on exciting new works. Most recently, she played gossip columnist Lisbeth in The Shelter's world premiere production of Trapper at 4th Street Theatre, and directed the subway comedy Strays for T. Schreiber Studio's Short Play Festival. She wrote and performed in The Good Sergeant, about a woman whose true identity is The Beatles' Sgt. Pepper, for Fresh Ground Pepper's EPIC at the Irondale Arts Center. Jessica is a LAByrinth Theatre Intensive Ensemble member, a Tisch School of the Arts graduate, and a member of AEA.

In Dreamcatcher Junior, we believe in having fun while developing real skills under the guidance of professionals. DRT JR is an enjoyable way for students aged 10 to 17 to explore their interest in the performing arts during their summer vacation. Students receive individual attention, constructive feedback, and the support needed to achieve their personal goals.

In the first week, the ensemble begins to come together through classes and workshops in acting, improv, playwriting, singing and movement. These and other skills will be explored as the group builds the foundation for their creative process.

The second week focuses on the development and writing of an original play, which will also include music and movement. Students have the opportunity to shape their own characters and performances, which might include new subjects explored in the first week such as stage combat and physical comedy.

In the third week, the cast and their director, musical director and choreographer hone and refine their original work in preparation for its presentation on the final evening of the program.