There’s something special about the brasses in a symphony orchestra. They sit in the back and are not often featured. But when they are, they sound like the voices of angels, heralding the arrival of great things.

The Baroque Orchestra of New Jersey finished its season with a concert at Dolan Hall on Sunday, June 3, with brasses in the spotlight. Guest artists were some of the finest French horn players on the American musical landscape, and they were featured in a gorgeous performance of Georg Phillip Telemann’s Concerto in Re Maggiore (Concerto in D Major) No. 246. 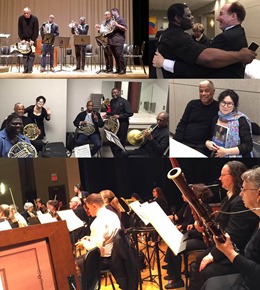 Soloists were Marshall Sealy, Jeff Scott and the legendary Robert Watt on the French horn, and concert mistress Agnes Kwasniewska on the violin, with guest artist Lynn Czae on continuo. Watt, who came from his retirement Los Angeles for the occasion, is the first African-American to be a regular member in a major American symphony orchestra.

The concerto, which made up the scheduled part of the second half of the program (more about that to come), was glorious. The first movement, vivace, and the third, presto, were brilliant, sparkling like lights on crystal. There is a mathematical precision to this music that reflects the Age of Reason, of which it was a part.

The second movement, however, grave, was given to the violin. The horn players actually retired to the side of the stage, while the always-exciting Kwasniewska played the slower, more intimate music. Even at a slower pace, however, Telemann’s music remains somehow profoundly rational. We need to hear more of his work.

Following the Telemann concerto, the orchestra left the stage, as Butts informed the audience that it was, along with the musicians, about to be surprised by the soloists. There were to be encores that had not been announced. 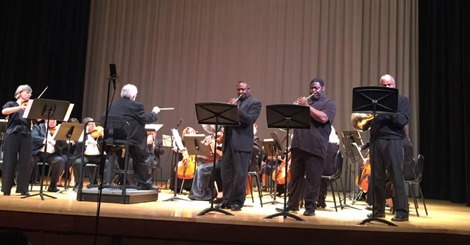 The three soloists (above) were joined on stage by two additional French horn players, Usamah Mustafa and Vincent Chancey. They began by playing a familiar theme from Wagner’s Tannhauser, and followed it with a tribute to the late Jerome Ashby. Ashby, a horn player with the New York Philharmonic, died in 2007. The work dedicated to him was Madrigal, by Orlando di Lasso.

The quintet moved on to Georg Friedrich Handel and the famous Royal Fireworks Music and ended with an amazing arrangement of America, the Beautiful. The patriotic song, which was composed by Samuel A. Ward, was arranged in unexpected harmonies by Marshall Sealy. I must admit I have never before given a lot of thought to the French horn but it turns out to have a distinctive voice that I won’t soon forget.

Which brings us to the pre-intermission part of the Sunday’s program. It began with a performance of Mozart’s Symphony No. 34, probably the last symphony composed in Salzburg, before Mozart moved to Vienna. Charming and elegant, it was performed with the style we have come to expect when BONJ plays Mozart. (Good news: the orchestra will be doing a concert version of The Marriage of Figaro in August.)

Following the symphony, there was a performance that had been scheduled several months ago and cancelled: Concierto de Aranjuez, by 20th century Spanish composer Joaquin Rodrigo, featuring solo guitarist Stanley Alexandrowicz. The concerto was inspired by Aranjuez, a palace in Spain built by the monarchy in the 16th century and restored in the 18th century. It was composed in 1939, shortly following the end of the Spanish Civil War, and has been the subject of much speculation about its political significance.

Politics aside, it is a beautiful work that incorporates traditional Spanish guitar music with modern interactions among different instruments in the orchestra. Alexandrowicz is a wonderful soloist, seeming to become one with his instrument. We are glad he and the orchestra decided to revisit the Rodrigo, enabling us to span more than three centuries of music that somehow manages to fit together.