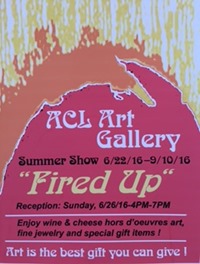 Art enthusiasts are invited to meet and converse with participating artists at the avante garde ACL Art Gallery this coming Saturday.

The Gallery has welcomed Virginia Schaffer Block.  A native of New Jersey, Block has had her works included in hundreds of private and corporate collections throughout the East Coast and the Mid-West.  She has been represented by galleries in Washington, D.C., Pennsylvania, New Jersey, New York, Ohio and Florida since 1980.  Her current exhibited painting, "Midpoint," contains mixed acrylic media on canvas with collage.  Flanked by three canvases, "From Your Lips #1, #2,and #3," it can be seen on the wall through the gallery entry.

Works by many additional artists will also be featured.

The "Steam Punk On Fire" shoe by Linda Levitt is, according to the artist, a homage to the beginning of the Industrial Revolution.  The shoe, a product of industry, has been decorated with chains, gears and stars; the "fire" and the toes have been thread-painted on an industrial sewing machine.

Irene Feigen's powerful mixed media collage, "Light My Fire," is a composite of various match books treated with paint, actual matches, and jewels, creating, she says, "a play on energy and fun."

Mike Dziomba's painting, "On Fire," was inspired by a fall scene at the end of his street in Mendham.  He notes that, as he approached the street, "the light was just hitting the tree such that it seemed the tree was on fire."  He knew "on the spot" that is was going to be the subject of his next painting.

Vivian Olshen's "Flowers Grow Out of a Fire," is, she states, "a ravaged landscape, indicating hope for the future."

Arthur Meranus's oil painting, "Yellow Roses," is, he says, "an extremely complex painting....Yellow is the closest primary to white, which makes it a challenge to create contrast and motion."