REVIEW: A STAR IS BORN IN GEORGE STREET PLAYHOUSE’S “MY NAME IS ASHER LEV” 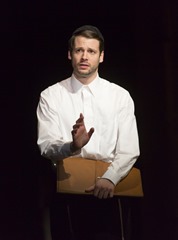 One of the joys of being a theater critic—or devoted theatergoer—is watching a star being "born," which is exactly what happens at the George Street Playhouse, where the young Miles G. Jackson plays the title role in My Name is Asher Lev. Onstage and speaking for the entire 100 minutes, Jackson (right) effectively gives voice to the artist's passion and the creative impulse in such a masterful performance that it can only be called a tour de force.

Adapted for the stage by Aaron Posner, Chaim Potok's 1972 novel recounts the story of young Asher Lev, a member of the Latover Hasidic sect (a self-described "Torah Jew") whose desire to draw and burgeoning talent are in direct opposition to a strict faith and long tradition. Risking his parents' strong disapproval, he draws from the age of seven, when we first meet him, eliciting a compliment from his Uncle Yitzkak as "a little Chagall." Over the course of the next decade and a half, he sneaks away to museums, where he draws crucifixions; studies with a noted Jewish artist, where he draws nudes; and finally attains fame in the artistic world as a prodigy with a "blasphemous" painting that causes his parents much pain.

Posner has constructed his play as a piece of music, dividing (with no formal breaks) the action into "movements" that examine the progression of Asher Lev's talent from his early years to full-fledged Artist. Jim Jack, George Street Playhouse's Director of Education, directs with a firm hand that keeps the audience's focus on the play's very weighty subject: the burgeoning artist finds his way to create in the face of a hostile world. Indeed, the 100 minutes pass quickly as we are carried along on Asher Lev's singular journey. 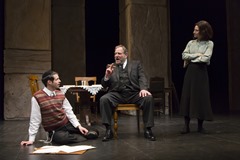 The action unfolds on an evocative set designed by R. Michael Miller—its tall, bulky stone pillars conveying the weight of thousands of years of tradition and history that attempt to stymie Asher Lev's efforts at every turn. Jackson is riveting as Asher Lev, his sing-song delivery perfect for a boy who has been brought up chanting Torah trope all day in school, while exuding a burning desire to produce art. His is a tortured soul; he doesn't want to hurt his parents, but he cannot hide his talent under a bushel and still be true to himself. Several times, he announces, "My name is Asher Lev," as though reminding himself that he is a person worthy of individual recognition. Especially in his confrontations with his father, Jackson breaks our hearts for this talented young man—although we never see physical representation of his art. (ABOVE: Jackson with Bob Ari and Leah Kaminsky as his parents)

Veteran actor Bob Ari (he played painter Mark Rothko in GSP's production of Red some years back) assumes several roles. As Aryeh Lev, Asher's father, he is a devout Hasid who travels the world establishing yeshivas—never mind that he leaves raising Asher to his wife but lays down the law when home. As The Rebbe (the community's leader, perhaps modeled on the late Lubavitcher Rebbe Menaḥem Mendel Schneersohn), Ari is more understanding of Asher's need to draw, even sending him to study with the apostate Jacob Kahn, portrayed by Ari as a cantankerous taskmaster, demanding that his student commit to his art and exposing him to experiences that run counter to Asher's religious upbringing.

In various female roles, Lena Kaminsky is equally as fine. As Rivkeh Lev, Asher's mother, she is bewildered by her son's artistic efforts, proud yet frightened because she knows it is forbidden. Her untenable position between her son and husband is very sympathetic. Kaminsky is the opposite as gallery owner Anna Schaeffer—sophisticated, a bit cynical, blown away by Asher's talent. 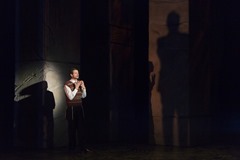 Kudos to Christopher J. Bailey for his lighting design. The large shadows of Aryeh on the stone pillars (left)convey the man's disapproval and the oppressiveness of tradition. Scott Killian's original music and sound design enhance the production without being intrusive, and David Murin's costumes (along with hair and wig design by Jared Janas) subtly, albeit pointedly, transport us to the Hasidic and artistic worlds. Finally, to make our peek into the former feel even more authentic, the actors' pronunciation of Yiddish expressions—thanks to dialect coach Stephen Gabis—is convincing and natural. 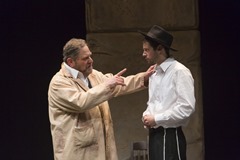 While all art is not born of anguish, My Name is Asher Lev presents a portrait of the artist as a young man, battling against tradition and a history of Western art devoid of Jewish artists (at least until the early 20th century when Marc Chagall painted scenes of his shtetl to great acclaim). For young Asher Lev, art has become his new religion and, like all new faiths, will be tested and, yes, persecuted. (ABOVE:Ari as Jacob Kahn counsels Jackson as Asher Lev)

Posner's play and Potok's novel help us understand, as Asher attempts to explain to his father, that art is "a personal vision expressed in aesthetic terms." It's weighty stuff, this, conveyed by inspired acting and outstanding staging. My Name is Asher Lev is a must-see for adults and teens alike. Be sure to get down to New Brunswick before it closes on May 1.

My Name is Asher Lev will be performed at George Street Playhouse, 9 Livingston Avenue, New Brunswick, through May 1. For performance times and tickets, call the box office at 732.246.7717 or visit online at www.GSPonline.org