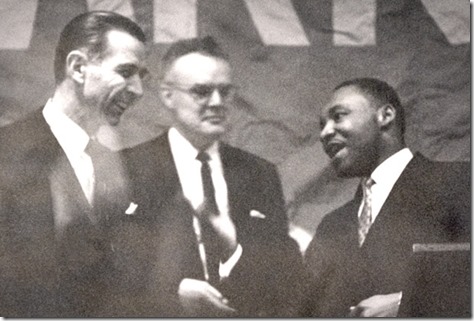 On February 6, 1961, Dr. Martin Luther King Jr. visited Kean University and gave a speech in the D’Angola Gymnasium entitled The Future of Integration. In that speech Dr. King wrote, “human progress is neither automatic nor inevitable…every step towards the goal of justice requires sacrifice, suffering and struggle.” This Black History Month, Kean University is celebrating the sacrifices, struggles and achievements of black Americans with a diverse array of campus events.

A ceremony will be held in the D’Angola Gymnasium on Tuesday, February 9, at 3 p.m. to commemorate Dr. King’s historic visit and recognize his courageous leadership of the civil rights movement.  All members of the Kean community and the public are invited.

Kean University’s Student Organization and the Pan-African Student Union (PASU) kicked-off Black History Month with a flag raising on Monday, February 1. The African-American flag was raised outside Kean’s Miron Student Center (MSC), where it will fly throughout the month of February.

PASU will present Labels, an open discussion focusing on cultural and ethnic stereotypes and their impact, on February 2 in MSC room 226 at 8 p.m.

United Youth of New Jersey (UYNJ) will perform MLK: The Nightmare After the Dream at Kean’s Wilkins Theatre on Saturday, February 6. The play focuses on Dr. King’s I Have a Dream speech and the impact of that speech on the civil rights movement. Doors open at 2 p.m. and the performance will begin at 3 p.m. Tickets can be purchased at the Wilkins Theatre box office for $12.

Kean’s Africana Studies Department is planning several events in honor of Black History Month. On Tuesday, February 16, the Office of Africana Studies will host a screening of the film 500 Years Later by M.K. Asante, a documentary exploring the global legacy of slavery. Infused with the spirit and music of liberation, 500 Years Later chronicles the struggle for freedom from enslavement to the ongoing fight for social justice.

The Office of Africana Studies will host a screening of the film King Leopold’s Ghost: A Story of Greed, Terror and Heroism in Colonial Africa at 12:30 p.m. in the Miron Student Center’s Little Theater on Wednesday, February 17.

Ms. Gloria Brown-Marshall will lead a lecture and discussion on Nzinga Mbande, a Mbundu monarch who fought against the expansion of the slave trade in Central Africa, at 12:30 p.m. in the Miron Student Center’s Little Theater on Thursday, February 18.

On Wednesday, February 24, the Office of Africana Studies will present a Concert For Understanding in Kean’s Little Theatre with performances by Rene McLean with Urban Djaliya. A student open mic poetry showcase will also be held. Admission is free. Doors open at 7:30 p.m. and the show starts at 8 p.m.

A screening of Emmanuel’s Gift, a documentary chronicling Emmanuel Yeboah’s remarkable life, will be held in Kean’s STEM auditorium on Sunday, February 28, at 3:00 p.m. The film is narrated by Oprah Winfrey.  Tickets are on sale now at the Wilkins Theatre Box Office for $5 each.

Kean University’s commitment to diversity and inclusion is ongoing.  All are invited to share in this month-long celebration, as we acknowledge the varied and invaluable contributions of our vibrant black community.

ABOUT KEAN UNIVERSITY
Founded in 1855, Kean University has become one of the largest metropolitan institutions of higher education in the region, with a richly diverse student, faculty and staff population. Kean continues to play a key role in the training of teachers and is a hub of educational, technological and cultural enrichment serving nearly 15,000 students. The Nathan Weiss Graduate College offers four doctorate degree programs and more than 60 options for graduate study leading to master’s degrees, professional diplomas or certifications. The University’s six undergraduate colleges offer 50 undergraduate degrees over a full range of academic subjects. With campuses in Union and Toms River, New Jersey, and Wenzhou, China, Kean University furthers its mission by providing an affordable, accessible and world-class education. Visit Kean online at www.kean.edu.