FAMILY FUN UP NEXT AT McCARTER

McCarter Theatre Center starts the new year off with two events perfect for all ages. Tickets are on sale now at the Box Office, by phone at 609-258-2787 or online at mccarter.org 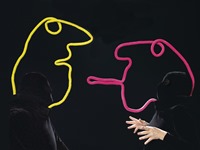 In the wordless universe of Mummenschanz, the ordinary becomes extraordinary when common materials, everyday objects, and colorful abstract forms spring to life in a visually stunning spectacle that transcends cultural barriers and sparks the imagination.

Formed by founding members Andres Bossard, Floriana Frassetto and Bernie Schürch, Mummenschanz has since inspired generations of show-goers across five continents over four decades. By creating a playful yet compelling experience through the inventive use of shadow, light, and creative manipulation of objects, Mummenschanz offers timeless and universal insight on the human condition. The result is a visually stunning spectacle of that transcends cultural barriers and sparks the imagination of young and old alike.

From TV and film to stage and page, Sherlock Holmes has been enjoying a major popular resurgence in recent years. McCarter patrons will remember last season’s crazy romp through the moors with Ken Ludwig’s Baskerville: A Sherlock Holmes Mystery, and now Holmes is back with a brand-new show from the creators of Potted Potter.