DRAMA TO OPEN @ THE BICKFORD THEATRE THIS WEEKEND 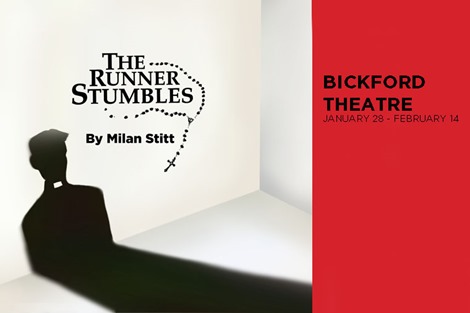 Set in 1911 and based on a true events, The Runner Stumbles centers on a young nun who has died under mysterious circumstances and the pastor who has been charged with her murder. With alternating action between interrogations, testimony and scenes from the past, the secrets and taboos of their relationship come to a head, as a feverish struggle ensues against the tides of passion, faith and justice.

About The Bickford Theatre
The Bickford Theatre is a professional theater that produces and presents year-round entertainment, including a Main Stage Series, two Children’s Theatre series, a Jazz Showcase, and other concerts. The theatre is a Senior Member of the New Jersey Theatre Alliance, a not-for-profit organization of 30 professional theaters throughout the state, and works in conjunction with Actors' Equity Association (AEA) and the Stage Directors and Choreographers Society (SDC). From its beginnings in 1994 to the present, tens of thousands of theater-goers from across the tri-state area have enjoyed the Bickford Theatre’s many entertaining and diversified offerings in theatre, music and dance.

Founded in 1913, the Morris Museum is an award-winning, community-based arts and cultural institution which serves the public through high caliber exhibitions in the arts, sciences and humanities.  The Museum also offers educational programs, family events, and is home to the Bickford Theatre and its wide range of performing arts offerings. Continuously serving the public since 1913, the Morris Museum has been designated a Major Arts Institution and has received the New Jersey State Council on the Arts’ Citation of Excellence, among other awards. The first museum in New Jersey to be accredited, the Morris Museum was re-accredited in 2013 by the American Alliance of Museums.