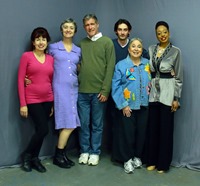 WHEN: January 9 - 30. Friday and Saturday performances at 8 pm, with Sunday matinees at 2 pm.
WHERE: Little Firehouse Theatre, 298 Kinderkamack Road in Oradell
TICKETS: $21 for all evening performances, $17 for matinees
Tickets can be purchased online at www.bcplayers.org, by calling 201-261-4200 or by visiting the box office at 298 Kinderkamack Road in Oradell during regular box office hours. Visa, Master Card, and American Express are accepted.
Those interested in Group Sales of 20 or more tickets can email groups@bcplayers.org or call the main number and press #6.

Are you "good people"? Find out as the Bergen County Players (BCP), NJACT's 2015 Community Theatre of the Year, kicks off 2016 with Good People, a show that contains mature subject matter and language.

USA Today has called the play "thoughtful and moving." Set in South Boston, Good People offers an intimate look at how luck, class and the choices we make intersect to form our lives.

"Good people," as depicted in the play, are those who Colletto says "have integrity, stay true to themselves and also know instinctively what others need". A big admirer of the playwright's other works, which include Pulitzer Prize-winning Rabbit Hole and lyrics for Shrek The Musical, Colletto is very excited about the opportunity to direct this play. "It is extremely well-written," he says. "The scenes are so moving, loyalties change, sides change. It's sad and comical at the same time, but always entertaining and very provocative for today's audiences, when so many people feel vulnerable about their financial future."

The story is set in motion when Margaret "Margie" Walsh (Paula O'Brien of Park Ridge), a working class Southie who has struggled for years, is fired from her job in a Dollar Store by her kid boss Stevie (Paul Reitnauer III of Demarest). Desperate for work, she decides to ask for help from a former neighborhood friend who has made good, Dr. Mike Dillon (Mic McCormick of Tenafly). Margie is joined on her mission to get work and make a point about life by her best friend Jean (Jean Marie Garver-Gaydos of River Edge) and her needy landlady Dottie (Michele Blum of Oakland), all of whom have failed to get out of the old 'hood. The cast is rounded out by Mike's posh wife Kate (Nadiya Braham of Hackensack) and the priest who calls out the bingo game (Ed Gross of Westwood).

As it has for the past few seasons, BCP continues to offer a

• Advance discount tickets for students age 25 and under with proper ID are available for $14 by phone or walk-up only, and student rush seats can be purchased for $5 (cash only) starting 30 minutes before the curtain at every performance, pending seat availability. There is a limit of one rush ticket per student.

• Parking is free at the Park Avenue municipal lot, across the street, one-half block north of the theatre.

Further information, including additional photos, can be found at www.bcplayers.org.