REVIEW: “THE NETHER” RAISES MORE QUESTIONS THAN IT ANSWERS

Virtual: “Almost or nearly as described, but not completely.” That’s a dictionary definition of a key word in Jennifer Haley’s play, The Nether, which opened this past weekend at the Lackland Center on the campus of Centenary College in Hackettstown. A production of the Centenary Stage Company, it isdirected by Carl Wallnau.

This play is about virtual reality, and thus what “virtual” means is important. Look at the definition. Virtual reality is not quite reality. So what is it? Are we entering the realm of metaphysics? Or are we just entering the world of computer gaming?

The Nether, we learn in the first few minutes of this mind-twisting play, is an updated name for the Internet. It’s apparently the near future, and the Internet seems to have expanded in a way that is both scary and sloppy. The scene is a familiar police interrogation room (left) and a young female cop is questioning (or sort-of questioning) a distinguished older man, Sims.

The questioning is confusing. For one thing, Sims is not under arrest and can leave at will. Except if he does, he will lose—what?—access. Access to the Internet, or the Nether? He won’t be able to get his email? What? This is never made clear.

Even more unclear is why. A mystery of sorts unfolds. It seems to involve pedophilia and murder. But does it? Remember, this is virtual reality. Do these horrendous acts, some of which we see acted out, really happen? Or are they not quite happening?

Other characters emerge, including Iris, a nine-year-old girl in Victorian garb; another older man, Doyle (this one less distinguished); and a younger man, Woodnut, a virtual reality customer. And the spare, cell-like interrogation room, which is located center stage, is eclipsed by elaborate rooms representing places in a Victorian house. But using virtual to mean not quite, it turns out that only the interrogation room is real. (Above, right: Woodnut and Iris) 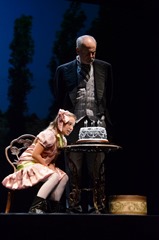 And what about the people? Well, Iris is apparently not quite real. At least in the flesh-and-blood sense. We think. And the pedophilia and murder are not quite real either. They are the acting out of secret desires, for the privilege of which the customers pay. (Left: Iris and Papa)

That seems to be what the police are investigating: Sims, who is the ringmaster behind this circus, is apparently making money. One would think this is an IRS issue rather than a police one. However, one of his customers, the unfortunate Doyle, has hung himself, presumably after acting out his fantasy. That fantasy, incidentally, is more than a little blurry itself.

In the end, we regret to say, nothing happens, except we think Doyle is dead—really dead. The play never deals with the questions of whether the police can or should prosecute people for what they virtually do, which is a real question for our society. And we don’t know if Sims can get his email, nor do we care. Presumably Iris has shed her Victorian garb and returned to middle school.

This confusing play has been beautifully directed by Wallnau, elegantly mounted and paced. All of the actors, Craig MacDonald as Sims, Erica Knight as Officer Morris, Peter Levine as Doyle, Christopher J. Young as Woodnut and, most notably, 12-year-old Olivia Mancuso as Iris, perform beautifully.

Predictably, Bob Phillips’ sets (above) are brilliant. Phillips has been providing extraordinary sets for CSC for the past few years, and we’re sorry to hear that he is retiring. We wish him the best for whatever adventures await him.

The Nether, by Jennifer Haley, runs through Oct 25 at the professional Centenary Stage Company in the Lackland Center for the Performing Arts – Hackettstown.  For information and tickets, visit  www.centenarystageco.org or call the box office at  908.979.0900 .