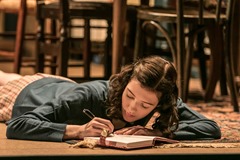 Of the 1.5 million children who perished in the Holocaust, none is as well known as teenaged diarist Anne Frank who, by chronicling her two years hiding from the Nazis, has become a symbol of life cut short before it could reach its artistic potential.

Now, the Shakespeare Theatre of New Jersey's poignantly powerful production brings Anne Frank's unforgettable life to the stage, just as the world is experiencing a new wave of refugees fleeing war and seeking sanctuary—something the folks in the Secret Annexe were unable to do. Written by Frances Goodrich and Albert Hackett as a play in 1956 (and adapted in 1997 by Wendy Kesselman after original text deleted by Otto Frank was restored to the diary), The Diary of Anne Frank certainly is, as Variety claimed, "one of the 20th century's most remarkable and enduring pieces of literature." 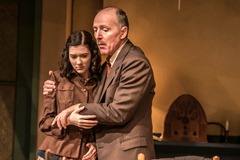 Shortly after their elder daughter Margot received a notice to report to Amsterdam Nazi headquarters in July 1942, Edith and Otto Frank (right, Bryan Scott Johnson with Emmanuelle Nadeau) set in motion a plan to sequester the family in the attic of the building in which Otto's business was housed. He invited the Van Daan family to hide with them, and they were later joined by a middle-aged dentist. Two of Otto Frank's former employees supplied the attic's inhabitants with food, clothing, books and news of the outside world for what was supposed to be a short stay that lasted over two years. One August afternoon, however, they were discovered by the Nazis and carted off to the camps, where all but Otto Frank perished. Gangly Emmanuelle Nadeau (top, writing in the diary) is a veritable whirlwind as Anne, newly arrived and anticipating an adventure. Chatting incessantly, she conveys the charming brattiness of a 13-year-old girl who becomes more introspective and philosophical, and much more sympathetic as time passes. However, she often engages in more declamation than conversation; much of her dialogue consists of reciting what she has been writing in her red-checkered diary, but when she speaks with the other characters, she often doesn't sound natural and convincing. Lauriel Friedman is fine as the rather mousy, goody-two-shoes Margot—a thankless role—who she really shines in an intimate conversation with her vivacious sister about any jealousy she may feel about Anne and Peter Van Daan's budding relationship. Sean Hudock is superb as the young man, all awkward and stammering in the beginning but warming to the attentions of Mr. Frank and Anne. The moment (and kiss) shared by Peter and Anne in the garret is very touching and tender. 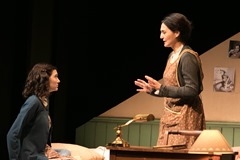 Bryan Scott Johnson's fully realized portrayal of Otto Frank is warm and loving as he acts as mayor/arbiter/superintendent of the mini-society enclosed within the Annexe walls, In the thankless role of Edith Frank, Jacqueline Antaramian (right, with Nadeau) convincingly conveys her prim and proper character, dismayed and disappointed with her troubled relationship with her younger daughter. Our hearts ache when Anne is disrespectful toward her mother. 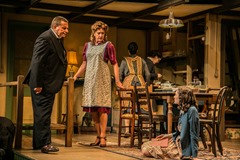 Carol Halstead and Anthony Cochrane (left) avoid the annoying portrayal of Petronella and "Putzi" Van Daan so prevalent in other productions; she is still a flirt, but she doesn't seem as silly as she's often portrayed (think Shelly Winters in the film). Cochrane's Putzi whines, complains and ultimately breaks down when discovered stealing bread. Just watching him sit dejectedly on the edge of the bed is heartbreaking. Rounding out the hidden group, Patrick Toon’s Mr. Dussel lacks the fuss-budget-y mannerisms that make the man so difficult to live with. Michael Leigh Cook's Kraler and Shana Wiersum's Miep are efficient, if not particularly warm. 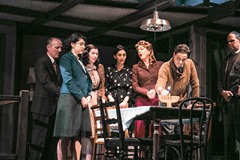 If you have seen the original play and film, you may be surprised at the passages about Jewish identity and Anne's budding sexuality that have been reincorporated into the script by Wendy Kesselman. We thus have a greater sense of who these people are and why they have had to seek sanctuary high above Amsterdam canals and streets. (Right: Bryan Scott Johnson, Lauriel Friedman, Emmanuelle Nadeau, Jacqueline Antaramian, Carol Halstead, Sean Hudock, Patrick Toon celebrate Hanukkah).

Considering the many references to Nazis and Hitler so prevalent in our political discourse and the seeming lack of knowledge in other parts of the country about the Holocaust, it is important that we be reminded of one of the true tragedies of this terrible period in history: the cutting short of a creative life before it has had a chance to reach its true potential. Anne Frank may have been but one child in 1.5 million murdered, but she is a fine representative of what the world has lost in their passing. The Diary of Anne Frank reminds us and calls us to never let it happen again.

The Diary of Anne Frank will be performed at the F.M. Kirby Shakespeare Theatre, 36 Madison Ave., Madison (on the campus of Drew University) through November 21. For information about performance times and special events and to purchase tickets, call the box office at 973.408.5600 or visit www.NJShakespeare.org online.