It's appropriate that Two River Theater's polished production of August Wilson's play about 1940's Pittsburgh be titled Seven Guitars, given the prominent role literal and figurative music plays in it. Add to that the dramatic harmony of seven superb actors, and you have a play that hits all the right notes. 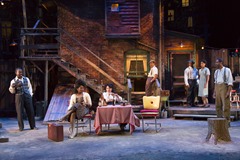 Set in the backyard of a rundown ghetto tenement, Seven Guitars eschews the emphasis usually placed on plot and opts to convey the black experience of the people who actually live it. Bookended by a scene of six friends sharing a post-funeral repast, jazz musician Floyd Barton's death is never in question, but how he died is, and that drives the dramatic arc of the play. Along the way, we learn about (and witness) each friend's relationship with the deceased as it waxes and wanes, his betrayals of each, and the dream each one has for him or herself. Directed with a confident intimacy by August Wilson-veteran Brandon J. Dirden, the result is sadly satisfying and a fine addition to Two River Theater's history of producing Wilson's works. [Above: From left: Charlie Hudson III (Red Carter), Brittany Bellizeare (Ruby), Crystal A. Dickinson (Louise), Jason Dirden (Canewell), Kevin Mambo (Floyd Barton), Christina Acosta Robinson (Vera), and Brian D. Coats (Hedley)] 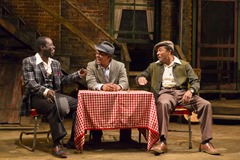 The plot is simple: released from jail, bluesman Floyd "Schoolboy" Barton returns from Chicago to Pittsburgh's The Hill neighborhood with hopes of reconnecting with Vera, the woman he betrayed for another when he left seek musical success in the Windy City. When a recording he made suddenly becomes popular, success appears to be within his reach, but only if he returns to meet with the folks at Savoy Records to jumpstart his career. He tries to get his band back together, encouraging harmonica player Canewell and drummer Red Carter to join him despite their misgivings. Offering advice, solicited and not, are chicken man Hedley who dreams of owning a plantation and producing a child to carry on his name; sassy hairdresser Louise, who has an opinion on everything; and her young niece Ruby who brings charged sexual energy to the action. As each character attempts to get what he or she want—often in questionable ways—tragedy ensues. [Above: Jason Dirden (Canewell), Charlie Hudson III (Red Carter), and Kevin Mambo (Floyd Barton)] 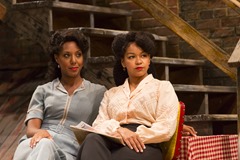 As Floyd Barton, Kevin Mambo is smooth, almost smarmy, but his yearning for success is palpable and sympathetic. Christina Acosta Robinson's Vera, his long-time object of affection, projects a quiet, confident elegance, sans histrionics, making his betrayal of her all the more touching; she's one classy woman. Louise, her neighbor and best friend, is portrayed by Crystal A. Dickinson as full of vinegar, feisty, earthy and thoroughly delightful; the two convey a fine dramatic contrast. Floyd's band mates, Charlie Hudson III's Red Carter and Jason Dirden's Canewell, brim with energy and high hopes, although their methods of attaining their dreams are sometimes misguided—and dangerous. And Brittany Bellizeare exudes sexual electricity as she sashays around the stage; she's wise beyond her years when it comes to men, even going so far as to ply her wiles with the oldest member of the group, old man Hedley, played by Brian D. Coates with an overwhelming sadness and longing for better days he's sure will come when his father dies and leaves him some money. (Above: Christina Acosta Robinson and Crystal A. Dickinson)

As for that music, it literally exists from Louise's very first entrance singing about her sweet potato pie to Floyd's rendition of The Lord's Prayer to Hedley's recollection of a trumpeter his father loved to listen to. And Hedley sings from time, to time, too, mainly songs about the superiority of the black man. Jason Brown is to be credited for original music.

Kudos to the production staff for an evocative set designed by Michael Carnahan and atmospherically lit by Driscoll Otto. Karen Ferry's period costumes complete the impression of time and place.

Coming in August Wilson's cycle of 20th century plays, Seven Guitars provides a glimpse of a slice of life. That black men can be arrested for jaywalking or having too much money resonates today with what is going on in America vis à vis relations between the police and black citizens. And the yearning for a better life is one that appeals to whites and blacks, which is what makes the play universal. Once again, Two River Theater shows that it is a first-class interpreter of August Wilson's plays, introducing them to New Jersey theatergoers in polished, engrossing productions.

All Photos by T. Charles Erickson