For a lover of all things Sondheim, the news that the Light Opera of New Jersey was presenting A Little Night Music at the Morristown-Beard School was exciting. Having experienced the joy of hearing the marvelous voices of this company at their annual September Song, I was eager to see this fully staged production of A Little Night Music. I was not disappointed.

Stephen Sondheim is often thought of as the “thinking man’s (or person’s) composer of musical comedies.” Eschewing the repetitious eight bar melodic line, he serves up a veritable smorgasbord of tempos and melodies, not to mention literate lyrics that actually say something often more profound than those found in Andrew Lloyd Weber-Tim Rice (Cats) or Alain Boublil-Claude Schönberg (Miss Saigon) musicals. He even rhymes “liaisons” with “raisins”!

For these reasons, perhaps, along with the need for truly talented singer/actors to tackle the difficult material, Sondheim’s musicals are not often mounted by amateur theater companies. Director Jeffrey Fiorello has assembled a group of singer/actors in a production of A Little Night Musicthat surpasses one I saw several years ago in Philadelphia and is equal to the 2009 Broadway revival. (Watch a trailer video of the production here)

Based on Swedish director Ingmar Bergman’s 1955 film, Smiles of a Summer Night, A Little Night Music tells the tale of long-ago romance rekindled during a summer weekend in the countryside. Widowed lawyer Fredrik Egerman wed eighteen-year-old Anne 11 months before, but the union has yet to be consummated due to the bride’s squeamishness for the marriage act. During a performance of a French farce, the passion Fredrik once felt for starring actress Desirée Armfeldt is reawakened, much to the consternation of her lover, Count Carl-Magnus Malcolm, and the delight of his wife Charlotte! Meanwhile, Fredrik’s socially-inept son, the seminarian Henrik, secretly pines for Anne and attempts to keep his passion in check with a good dose of theology. To top it all off, Desirée realizes her long-suppressed amorous feelings for Fredrik and sets her cap for him, dumping Carl-Magnus in the process. When she invites the entire Egerman clan to her mother’s villa for a weekend, a gathering the uninvited Count and his wife crash, the various romantic story lines are thrown into a terrific how-de-do with uproarious results.

Of the seventeen roles, seven have been filled by actors making their LONJ debuts; others have appeared in previous productions. Together, they constitute a very talented troupe, well-suited to the rigors of a Sondheim show. The performances Fiorello gets out of his performers are nothing short of astonishing. 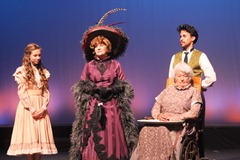 As Desirée, the role made famous by Glynis Johns on Broadway, Barbara Haag (left, center) is both sexy and wistful at the same time. Displaying an imperious bravado, Haag is sympathetic as she mordantly jabs at her mother and lovers, attempting to hide a world-weariness (beautifully expressed in "Send in the Clowns”) and the realization that she is nothing more than an aging actress touring the provinces, playing to half-full houses and entertaining aging and pea-brained admirers. Robert Jacobson as Fredrik Egerman aptly conveys the aches and pains of middle age as he muses about how to deal with a very young wife and the pains of juggling romantic entanglements. The Count is played hilariously as a booby by a very talented Kevin Grace (below, right). Interacting with first Desirée and then his wife Charlotte, he is a pompous and arrogant male chauvinist, heisted on his own petard when Charlotte, the luscious and lovely-voiced Sandra Taylor (below, left), archly throws herself at Fredrik and is almost successful in seducing him! 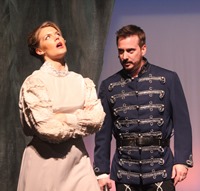 Lauren Dwane is Anne, a teenager who once called Fredrik “Uncle,” then married the old man. All curls and giggles, she nevertheless needed to convey more adolescent giddiness and flirtatiousness as she tempts her husband, then rebuffs him; plots against Desirée with Charlotte; and unmercifully teases her stepson Henrik. He, of course, is head over heels for her, and as played by Shane Long, he represses these feelings and comes off as a stuffy prig, old beyond his years. It’s a thankless role for a young actor, but Long manages to make the young man as sympathetic as he is maddening.

Other standouts in the cast are a marvelous Madison Washer, who plays the lusty maid Petra and who, very near the end of the play, performs the multi-tempoed, tongue-twisting “Miller’s Son” and brings down the house. Penny Hoadley (above, in wheelchair) is superb as Desirée’s mother; a worldly-wise courtesan, she mournfully laments the sad state of “Liaisons”—where she once got a villa and a wine cellar from a lover, modern women get nothing of any value! Adelaide Prekopa (top, left) is adorable as Desirée’s daughter Fredrika, and as the butler Frid, Adrian Rifat (top, right) is appropriately formal, but not above seducing Petra. 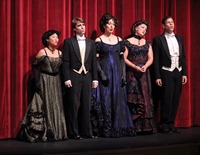 Five actors—two men and three women—make up a Greek chorus that comments on the proceedings. Jarrett Smith, Susanna Su, Lyssandra Stephenson, Alex Corson and Kristin Roney all sing very well (they look good too) and move around the stage with style and grace.

The Founders' Hall stage is bare, so elegant props are used to suggest various locales. Richard Morley's graphic design uses changing colored backgrounds that help the audience focus on the events and characters, many of whom occur and perform at the same time. Lois Buesser has assembled and conducts a gifted group of musician, while Megan Ferentinos' choreography nimbly moves the actors around the stage in often complicated patterns. Coordinated by Mark Happel, many of the costumes are originals from the New York City Opera's revival of A Little Night Music; needless to say, they are elegant, time appropriate and luxurious. The wigs are fantastic!

If you've never attended a production by the Light Opera of New Jersey, this summer production (the last of the season) is an ideal introduction to the vocal magic performed by the troupe on a regular basis. Lauran and Bill Corson have a great deal to be proud of in this version of A Little Night Music. If a summer night smiles three times (once for the young, a second for the fools and a third for the old), then I want to add a fourth: a smile for theater-goers who will see this production before it closes on July 19 at 2 PM! Go!

A Little Night Music will be performed at Founders' Hall, Morristown-Beard School, 70 Whippany Road, Morristown, through Sunday afternoon, July 19, at 2 PM. Other performances are July 17 and 18 at 8 PM. For information and tickets, visit www.lightoperaofnewjersey.org.