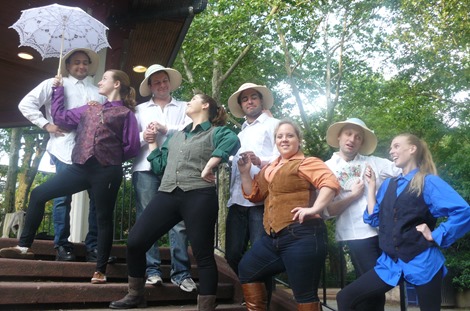 The Hudson Shakespeare Company of Jersey City kicks off its 24th Shakespeare in the Park series with a new twist on old favorite presenting a cross-gendered Shakespearean comedy,

When many of us are introduced to Shakespeare in school, one of the details that often stands out is that only male actors played all the parts. While this practice seems strange to us, it was the accepted convention that on the professional London stage only men were considered suitable enough for a dubious profession of being "an actor."

Despite the fact that it was illegal for women to be actors and women did appear on stage in England but in regional religious festivals and on the professional stages of Spain, France and Italy. This curious English only practice was so entrenched in their culture that even decades after Shakespeare died and women finally came to the stage some of the old guard actors decried the practice saying that actresses couldn't truly depict women on the stage.

"Each season, Hudson Shakespeare likes putting new and fresh spins on popular titles and exploring titles that audiences may not be normally exposed to," said director Jon Ciccarelli. "Love's Labours Lost on its own is a fun romp of a romantic comedy and a feast of Shakespearean poetry but we wanted to see how else to delve into what is essentially of men and women trying to outwit each other when it comes to seduction of the other gender. So we decided to take the commonly known Shakespeare practice of men playing all of the roles and expand it to having women take on male characters," Ciccarelli said.

Ciccarelli urged that the show isn't some treatment on gender studies or making some bold statement but having fun with the Shakespeare convention of cross gendering. "Shakespeare's male actors did it their day and many of his other plays feature cross dressed women who dress up as man, so we're going more for what behaviors or attitudes make up what it means to man or woman as played by the opposite gender and we've found there are really no hard fast characteristics. They run the gamut and "Love's Labours Lost" is a hysterical play to explore how the other half lives", he added.

Hudson Shakespeare Company, now in its 24th season of traveling Shakespeare. The company will return in July with the Lost Shakespeare Play The Murder of Thomas Arden of Faversham, a black comedy featuring a bunch of inept killers in their various pathetic attempts to dispose of a rich land owner with a twist ending and the tragedy of the prince of Denmark, Hamlet in August.